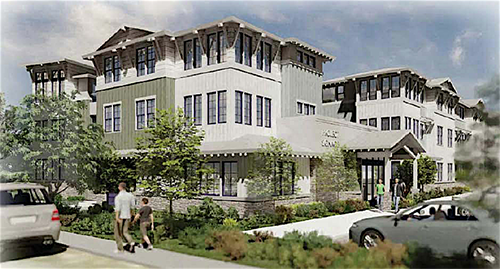 A rendering of what the apartments at 405 Atascadero Rd., will look like when completed. Rockview Street closed June 22 to traffic while underground work is done for the low-income apartment project. Photo by Neil Farrell

Morro Bay residents who regularly use Rockview Street will have to take the long way around after the closure of that street for a month as part of the construction on the first, low-income housing development in Morro Bay since 2015.

The Housing Authority of San Luis Obispo (HASLO) is building 35 total apartments in a mix of one, two and 3-bedrooms, and deed restricted for low-income tenants.

The development broke ground a couple of months ago and on June 21, the City announced an extended road closure that would last about a month.

“Rockview Street between Sunset Avenue and Hill Street,” reads the notice from the City’s Derek Hanson, “will be temporarily closed starting Wednesday, June 22 through Wednesday, July 20, due to road work associated with a new development at 405 Atascadero Rd.”

The development of 35 apartments is bordered by Atascadero Road (Hwy 41), Sunset Avenue, Rockview Street and a small trailer park. It is a beehive of activity, as work on the site is well underway.

Estero Bay News asked the City about the work being done and Public Works Director Greg Kwolek and Hanson said the contractors on the apartment job need to put in retaining walls on either side of the roadway, also the Gas Company will be moving a gas main line in the street. When they are done, Rockview Street will be repaved, Kwolek said. The repair work is being done at no cost to the City, Kwolek said.

HASLO’s project is seen by City officials as a welcomed addition to the housing stock, and was even financially supported by the City Council. Back in 2020, the Council voted to award a loan of $150,000 out of its “Affordable Housing In-Lieu Fund,” a tax on new developments meant to encourage and support low-income projects.

When a developer doesn’t want to make a required number of units available to “low-income” folks (usually it’s one discounted or low-income unit for every 10 market priced units), they pay a fee to the City, where is accumulates, and is spent supporting projects like HASLO’s. (This affordability idea has also been extended by the Coastal Commission to low cost accommodation requirements for new motel projects, which must set aside some of their rooms at the average room rate — currently about $140 a night — or pay into an in-lieu fund).

The terms of the City loan say HASLO doesn’t have to make a payment on the loan for 55 years, covering the duration of the deed restrictions. The City is however, charging 3% “simple interest” on that money, so when it finally gets paid back, it’ll be $150,000 plus interest.

This has been done by the City before, but not for a while. “The City of Morro Bay has not had a new 100% affordable housing project added to the housing stock since the 2015 Morro Del Mar Senior Housing [on Main Street] project that included 21 affordable housing apartments for seniors,” Hanson’s report said.

Prior to the Morro Del Mar project the City had not had a fully affordable housing project built since 1996 with the Oceanside Gardens on Elm Street behind Spencer’s Market.

And the City had not had any project this large since 1989’s 40-unit Ocean View Manor Apartments on Elena Street, which is also behind Spencer’s. Both of these were built and are operated by People’s Self-Help Housing.

Also, Caltrans recently did a project along Hwy 41 at this same location to improve storm drainage off the highway. Contact Hanson at (805) 772-6285 with questions.