Safety Part of the Community Plan 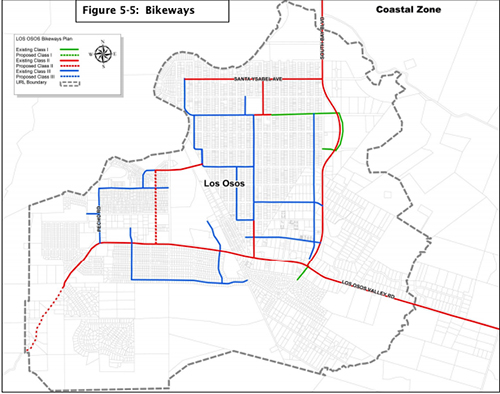 A lack of sidewalks throughout most of Los Osos means pedestrians, bicyclists and cars share the same road causing concerns that safety should be a bigger part of the plan for future growth of the area.

Spearheaded by a resident’s concern, the Los Osos Community Advisory Council voted unanimously to back a letter written by Jeff Krepps asking that the Board of Supervisors put more emphasis on pedestrian and bicycle safety in the proposed Los Osos Community Plan Update (LOCP).

“In my mind it is an important component to go forward with growth,” said Krepps during the recent LOCAC meeting. “…Let’s make sure we do that before there’s new growth, so you’re not extra impacting the safety on an existing community street. If the sidewalk is not practical, then maybe that new growth shouldn’t go there because you’re putting that one community in jeopardy.”
The LOCP is on the Supervisor’s Dec. 15 agenda, post press time.

In his letter Krepps said the issue with the Pedestrian and Active Transportation Plan is that there is no, “specified completion period nor any identified funding. The need for street safety has been an ongoing theme for the community and a critical element to the livability of our neighborhoods. Without proper plans in place in advance, new growth will further stress the safety of our streets.”

Although Krepps’ letter stated that the document’s proposed plan should be put in place prior to new growth in the area, LOCAC opted to soften the language.

“We support a plan of this sort,” said LOCAC member Sandra Sarrouf. “We support multi-modal travel, we want these issues looked at anytime new growth is happening. It’s more of just raising the awareness — we want this, we want you guys to pay attention to this aspect of it — without saying it has to happen before new growth happens, but in conjunction with.”

The Commission’s recommended LOCP, as of early November, includes Class I “bicycle paths” that are completely separated from roadways and are sometimes in an exclusive corridor. “In Los Osos, these paths will also be designed for pedestrians. Class II “bicycle lanes” are found alongside vehicle lanes in the roadway,” the report states. “Class III “bicycle routes” are used on low volume streets that are suitable for cyclists and are designated by signs only.

The County Bikeways Plan includes a network of community bikeways. Class II bicycle lanes are planned for two roads. Class III bicycle routes are located in several low volume local streets in order to encourage bicycles to use those streets as parallel routes to the major arterials and collectors in the community.

The Plan also identifies that sidewalks or other pedestrian paths be provided in new land divisions and with multi-family and commercial/office development.

“We are all for pedestrian safety and bicycle use especially on the side roads where there are kids that need to walk to school, there are people that are walking their dogs, ” said LOCAC Chair Tim Carstairs, “As we grow as a community we are going to want it to be as safe as possible.”

Should the plan go through, funding for bike lanes and sidewalks is still an issue and in “very short” supply, District 2 Supervisor Bruce Gibson said during the meeting.