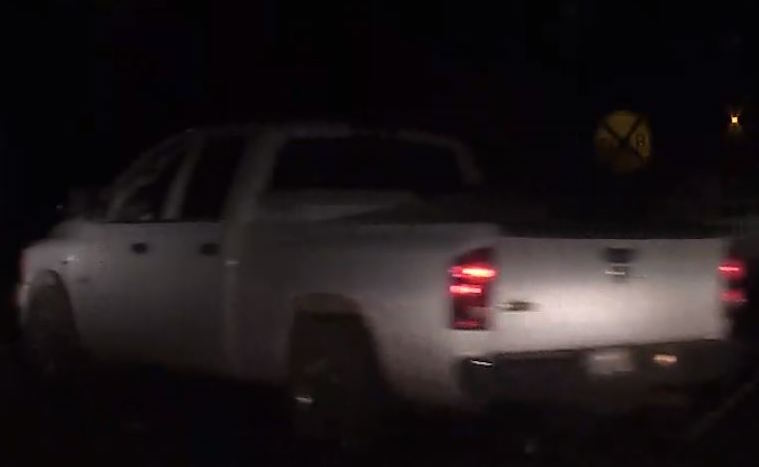 Sheriff’s detectives are asking for assistance in locating the driver of a white, Dodge Ram truck that was seen leaving the area of a police shooting.

The County Sheriff’s Department is looking for the driver of a pick-up truck in connection with the June 10-11 murder and shooting rampage in Paso Robles, where four police officers were wounded and the suspect killed in a shootout.

“Sheriff’s detectives are asking for assistance in locating the driver of a white, Dodge Ram truck that was in the area of 10th Street and Riverside Avenue in Paso Robles on June 10,” said Sheriff’s spokesman Tony Cipolla. “The truck was seen leaving the area around 4:20 a.m., approximately 1 minute before the suspect, Mason James Lira, began shooting” at the Paso Robles Police Station.

It began at about 3:45 a.m. in the 900 block of Park St., at the Paso Robles Police Station, when an unknown man began shooting a gun at the stationhouse. Paso police requested Sheriff’s and Highway Patrol assistance but when backup arrived, the gunman started shooting at them. A Sheriff’s patrol with two deputies was among them, searching for the suspect in the Downtown area.

At about 4:19 a.m. the two deputies came under fire and one of the deputies was shot in the face by the assailant. That deputy, Nicholas Dreyfus, 28, out of the Templeton Sheriff’s Substation, was pulled to safety by his partner, who also rendered medical aid. The suspect vanished into the night.

A full-blown manhunt was begun for the armed and dangerous suspect who evaded police until resurfacing again in the Salinas River Bed near Ramada Drive and Highway 46.

After another shootout with the suspect, three more law enforcement officers — a Highway Patrolman, an Arroyo Grande Police sergeant, and a Kings County deputy sheriff — were wounded in the shootout that took place in a vineyard.

The suspect, Mason James Lira, 26, a transient from Monterey with a long, violent criminal history was shot and killed in the exchange of gunfire.

None of the deputies and officers was seriously injured, though Dep. Dreyfus was airlifted to an out of the area hospital and treated for a head wound. He is expected to recover from his wound.

Now, with the Sheriff’s Office in charge of the investigation, detectives are asking for help with loose ends.

The white Dodge Ram they seek has a quad cab with a silver toolbox in the bed, Cipolla said, and possibly chrome rims.

In a blurry and dark photo of the truck included with the news release, the license plate in unreadable. The Sheriff’s investigators are asking anyone with information or the driver of the truck to contact detectives at 805-781-4500 or Crime Stoppers at 805-549-7867 (STOP), or see: www.slotips.org for online tips.

The Sheriff’s Office also put out a call asking for anyone with surveillance camera footage that might be helpful to their investigation to come forward.

“Sheriff’s Detectives are asking residents and business owners who may have video footage from anytime during the night of June 9 to the afternoon of June 11 to contact the Sheriff’s Office. Detectives are requesting any surveillance footage from the downtown Paso Robles area, as well as businesses surrounding the intersection of Highway 46 and Ramada Drive.

“Possible sources of video may be home surveillance cameras or doorbell type cameras,” Cipolla said. “If you have video footage from the dates and locations indicated, please contact the Sheriff’s Detective Division at (805) 781-4500.”

If anyone witnessed anything related to the incident and have not already spoken to detectives, you are asked to contact the Sheriff’s Office at that same number.