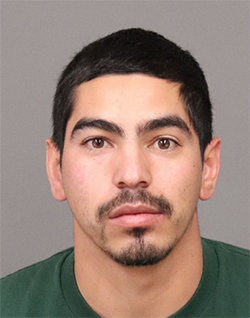 Sheriff’s deputies arrested a San Luis Obispo man for suspicion of felony domestic violence after conducting a manhunt that included a helicopter and police dog.
The incident started at about 9:20 p.m. Saturday, Feb. 27 with a report of a domestic disturbance in the 300 block of Colony Dr., in rural San Luis Obispo.
“Prior to their arrival,” Sheriff’s spokesman Tony Cipolla said in a news release, the suspect “was believed to have fled on foot. Deputies contacted the adult female victim, who had sustained non life-threatening injuries. A search of the area located his abandoned vehicle and a backpack containing firearms.”
Deputies called in a Highway Patrol helicopter and a K-9 unit from Atascadero Police to help them search for the suspect but they couldn’t find him for several hours.
Cipolla said about 4:30 a.m. Sunday, Feb. 28 they located the suspect “at a neighboring residence of the original crime scene.”
Deputies arrested Ivan Bojorquez, 29 of San Luis Obispo without incident charging him with suspicion of “attempted kidnapping, threatening with intent to terrorize, inflicting corporal injury to a spouse or cohabitant, and preventing a witness/victim from reporting a crime.” He was booked into the County Jail.
In a follow-up news release, Cipolla said they’d found evidence that Bojorquez was allegedly dealing narcotics, too.
Two firearms, ammunition and two pairs of brass knuckles were reportedly found in a backpack allegedly belonging to Bojorquez, Cipolla said. “Two pounds of methamphetamine, scales, and packaging material all indicating the sale of narcotics were also found in the backpack,” he added.
The victim in the case is doubly tragic. “The victim was pregnant at the time,” Cipolla said, “and had to be treated at two separate local emergency rooms for injuries related to two separate assaults.”