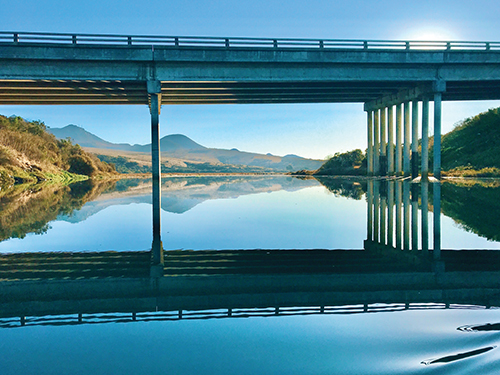 A project to replace a key roadway bridge connecting Los Osos and Morro Bay has hit more bureaucratic obstacles, forcing a fifth amendment to the engineering contract and pushing those costs alone past the $1.2 million mark.

The County has been working on a project to replace the Los Osos Creek Bridge on South Bay Boulevard for over 6 years now and in February increased the engineering contract with Dewberry Engineers, Inc., another $327,000.

Dewberry’s initial contract was for $795,000, and four previous amendments pushed it up to $933,000. This latest, fifth amendment brings Dewberry’s contract up to $1.26 million, according to a staff report.

The Los Osos Creek Bridge is on South Bay Boulevard, the main artery between Morro Bay and Los Osos, and is also part of the evacuation route under the Diablo Canyon Nuclear Plant’s safety plans.

“The bridge,” the County report said, “has been identified as seismically deficient and subject to liquefaction related collapse during a sizable earthquake. In addition to seismic concerns, some of the existing concrete piles have deteriorated over time. Replacement of the bridge, rather than seismic retrofit and pile repair, is the most cost effective alternative.”

The so-called “South Bay Boulevard Bridge Replacement Project” proposes to replace the existing bridge with a modern concrete girder bridge, the report said. The new bridge will be constructed alongside the old bridge, according to the County, and the old bridge torn down.

The area where the old bridge stood will be restored to a natural state. The project is eligible for Federal Highway Administration funding under the FHA’s “Highway Bridge Program.”

The County hired Dewberry in 2015 to guide it through the environmental review and permitting process, which has had a rough go of it so far.

“Since commencement of the original contract,” the County report reads, “the Project has completed the required California Environmental Quality Act [CEQA] review. However, other environmental analysis and permitting is ongoing since the Project is located within the Morro Bay Estuary and Morro Bay State Park, home to numerous special status plant and animal species.

“The area is also considered archaeologically sensitive. Archeological reports completed for past projects in the vicinity have resulted in significant archaeological finds. The Project is under the jurisdiction of numerous regulatory agencies, which occasionally, have divergent and conflicting environmental requirements resulting in several permitting challenges that County staff and Dewberry are working to resolve.”

And then there’s the Coastal Commission to contend with. “Further, the California Coastal Commission, which must issue a Coastal Development Permit for the Project to move forward, has requested that the County continue to evaluate a range of alternatives to restore estuarine habitats that were impacted when the original road and bridge were built.

“The CCC also requested that the replacement bridge include a pedestrian and bicycle path to connect to a future coastal trail, requiring the County to consider additional alternatives and initiate coordination with stakeholders.”

All this has elevated the project into the bureaucratic stratosphere. “As a result of the Project’s environmental and cultural sensitivities,” the County report reads, “and due to ongoing negotiations with permitting agencies, the Project’s pre-construction phase has taken longer than expected.

“The environmental process normally takes one to three years to complete for a typical bridge project. However, the process for South Bay Boulevard Bridge has taken over six years due to the complex analyses required to identify a Project alternative that meets all regulatory and permitting requirements and reduces project impacts while minimizing costs to the County. The environmental review and permitting phases are expected to be complete by 2024.”

Such issues are not new to bridges through the estuary. Replacing the old Twin Bridges, just a few miles down the road at State Park Road, took 40 years to work through, as at one point, some 35 different agencies were involved in reviewing the project.

Taking so long to permit a project runs the risk of the laws changing underneath you, which in turn leads to changes in design and to further delays and in turn increased costs. This project is a pretty good example.

“Due to the time needed to navigate environmental permitting for this project,” the County report said, “the seismic and bridge design codes, which govern bridge design, have undergone significant changes since Dewberry originally scoped the Project in 2015. These code changes have resulted in the need to re-engineer parts of the bridge superstructure and substructure.”

There are a number of agencies involved in the replacement of this roughly 50-yard stretch of roadway. The County said Caltrans controls the funding and environmental review under the National Environmental Policy Act (NEPA). Other agencies involved include the Coastal Commission, Regional Water Quality Control Board, Army Corps of Engineers, and California Department of Fish & Wildlife.

The funding package promises to be as complex as the permitting has been. The County plans to tap the FHA’s Highway Bridge Program using “Toll Credits,” the Regional and State Highway Accounts, Urban State Highway Account, State Aid — Nuclear Planning, and the County’s Road Fund.

So far the County has allocated $2.24 million for the project, which is spread out over several budget years. The final estimated cost to construct the replacement bridge is about $20 million.