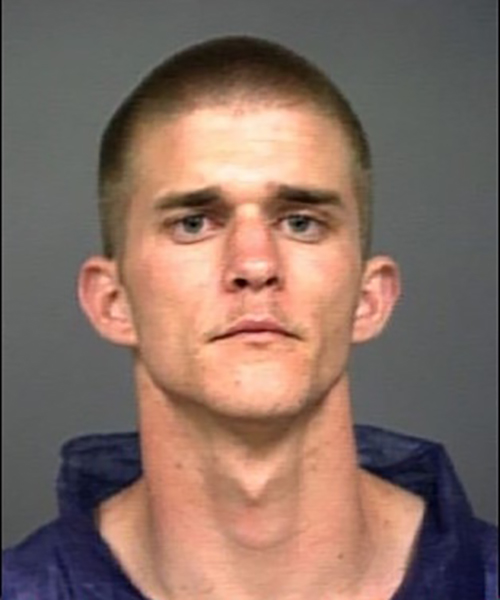 Jason Adam Greenwell, shown in a 2010 mug shot, has been granted parole after serving 11 years of a 15-years-to-life sentence in the grisly, torture and murder of teenager, Dystiny Myers. The district attorney has vowed to appeal the parole board’s decision.

A participant in one of San Luis Obispo County’s most infamous murders has been granted early parole, much to the displeasure of the District Attorney.

District Attorney Dan Dow, responding to the State Parole Board’s decision to grant convicted murderer Jason Greenwell parole, said, “I strongly disagree with the Parole Board’s decision to release Mr. Greenwell into our community after serving only 11 years for such a shocking crim. My office will aggressively seek review and repeal of the Parole Board’s decision in this case.”
Greenwell was convicted along with four others in the September 2010 torture and murder of 15-year-old Dystiny Myers of Nipomo.
Greenwell and his partners in crime, DA Dow said in a news release, “bound and savagely beat young Dystiny, then buried her in a shallow grave near Santa Margarita Lake. Before they fled, they set a fire. Dystiny’s bound and partially burned body was later discovered in the grave.”

Greenwell pleaded guilty to second degree murder in 2013 and was sentenced to 15-years-to-life in state prison. At the time of his sentencing, people convicted of murder were not eligible to receive “good time” credits — time taken off the end of a sentence for good behavior in prison. Dow said that meant that Greenwell “was required to serve every day of 15 years prior to even being considered for parole.”

But California has been on a trend of lessening sentences and crimes the past several years, and, “In 2016, Proposition 57 was passed, which provides individuals convicted of violent crimes, such as murder, up to a one-third or 33% reduction in their sentence,” Dow said. “As a result, Greenwell was granted paroled after serving only 11 years for his part in the murder.” It was the first time he was up for parole. Greenwell was 20 when he took part in Myers’ murder and the D.A. said he’s had a clean record in prison.

Myers’ family members attended the parole hearing via video and “strongly objected to his parole.” A representative of the SLO County District Attorney’s Office attended the hearing in person “and voiced a forceful objection to the release of Greenwell based on the vicious nature of the crime and continued danger to the community should he be released,” DA. Dow said.

Readers shouldn’t worry too much that the rest of these barbaric hooligans will be granted freedom, as three of the four — Ty Michael Hill, Frank Jacob York, and Rhonda Wisto — are serving life without the possibility of parole. The final murderer, Cody Miller, killed himself in prison back in June 2016, the DA said.

Myers reportedly was a runaway teenager that was staying in the Nipomo mobile home of Wisto and her son, York, when she ordered them to attack the teen, “for being disrespectful.”

Myers was beaten with baseball bats, brass knuckles, kicked and punched, forcibly injected with drugs and then driven to rural Santa Margarita. According to the autopsy, Myers suffocated to death because a glove had been shoved down her throat, apparently to keep her quiet on the drive to the killing place.

Wisto and York were tried together after Hill and Miller had pled guilty to all charges. Wisto and York were found guilty of murder, conspiracy to commit murder, plus special circumstances charges of kidnap-murder and torture-murder.
Greenwell testified against his accomplices and thus got the lighter sentence.