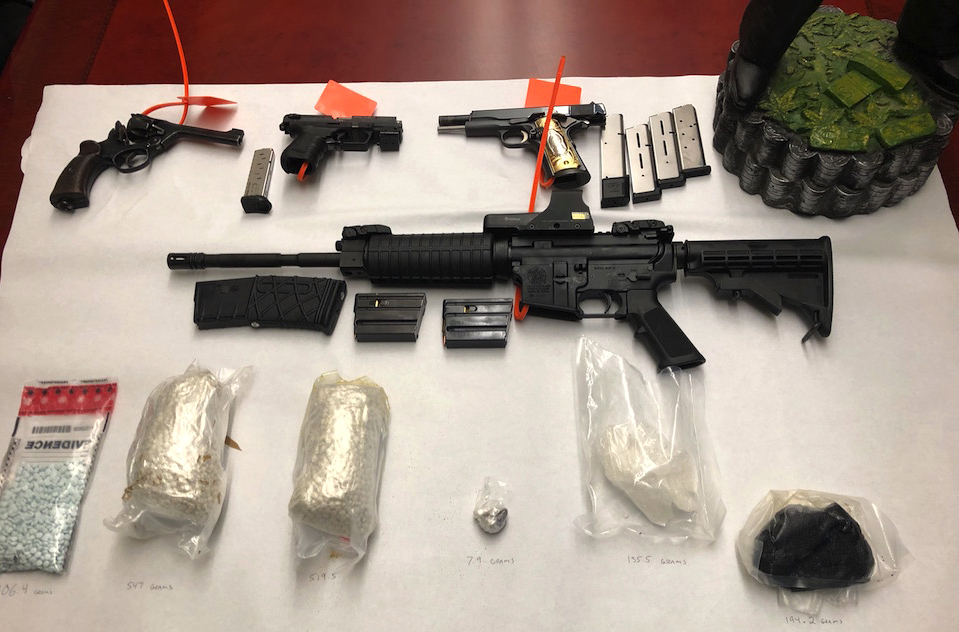 Sheriff’s investigators with help from federal agents arrested a Templeton man with a pharmacy-like stash of illegal drugs, weapons and cash.
According to Sheriff’s spokesman Tony Cipolla at 11:45 a.m. Thursday, May 13, Special Operations Unit detectives and DHS Investigation special agents served a search warrant on a home in the first block of Brewer St., Templeton.

The search, Cipolla said, uncovered several types and amounts of drugs including 5 ounces of suspected methamphetamine worth about $1,000. The stash of drugs included: 8.5 oz. of suspected heroin worth $7,500, and 1,000 counterfeit M30 pills containing fentanyl worth $10,000. Some $10,000 in cash and four firearms, including one reported stolen out of Templeton, were also confiscated.

The guns in Sheriff’s photographs appear to be one AR-15 style rifle, two semi-automatic pistols and one revolver.
Domingo Guerrero, Jr., 35 of Templeton, was arrested for suspicion of possessing narcotic substances for sale and possession of illegal drugs for sale. It was unclear if he would also be charged for the weapons or possession of a stolen firearm. Cipolla said the bust is part of a frightening scourge of hard drugs and death in SLO County.

“Overall,” he said, “the number of drug related deaths in the County is rising. And so is the number of fentanyl related overdoses.”
There were 53 drug ODs in SLO County in 2019. Some 11 of these people also had fentanyl in their blood systems, he said.