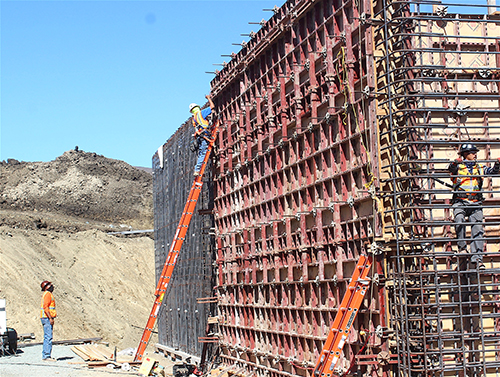 Workers fashion the rebar cage of one of two bio-reactors. The final grade of the plant site will be 10 feet higher than now leaving just a few feet of the tanks above ground; but that won’t happen until after both concrete tanks have been poured, cured and filled with water to check for leaks.

Morro Bay’s Water Reclamation Facility Project is well along with its $130 million construction schedule, and City and project managers gave the city council and media a tour of the treatment plant site last Monday, Oct. 12.
City Manager, Scott Collins explained that the City wanted to do a big celebration and groundbreaking last March with the contractors, council, funding agencies and the public for, “the largest infrastructure project in the City’s history,” but then the coronavirus pandemic hit.

So that celebration got canceled, Collins said, and the City waited until the project had reached a point where it would be safe for a gathering that turned out to just have city officials, construction managers and the media.
A small group of protesters stood at the entrance to the job site on Teresa Drive, waving signs criticizing the project, which has already seen millions in cost overruns and change orders, and bids on the conveyance system came in millions above the engineer’s estimate.

The planning for this project started in early 2013 after the Coastal Commission denied the City’s first project, Collins said. That project was denied at the behest of the then-Mayor and council majority.
The new WRF will replace the City’s aging treatment plant, Collins said, protect the environment and provide drinking water to the city. He added that the new project would also satisfy all the state and federal regulations and create a drought buffer that can provide up to 80 percent of the drinking water demand.

The City was, he said, “committed to ensuring a safe, sound water system that meets regulatory requirements.”
He said the City had pursued all possible avenues to make it affordable, including securing a $61 million low interest (0.85%) Federal EPA loan that will save some $29 million in interest costs over the life of the loan, from $800,000 to $900,000 a year.
The City, Collins said, is still working on a State loan to cover the remainder, minus whatever amount of cash the City plans to use from the $41 a month surcharge it enacted last summer.

The City has been pre-approved by the State Revolving Fund or SRF loan program for up to $100 million in loans and also to receive a $5 million grant that doesn’t have to be repaid.

Estimates are that the City’s already spent over $24 million on the project.
Collins said the City was “extremely proud” at how the project has come together and they now expect completion of the treatment plant in November 2022 and the 3.5-mile conveyance system of pipes soon after that.

After an initial delay of several months due to a snafu between the EPA and U.S. Fish & Wildlife Service over the environmental review and taking of red-legged frog habitat, the construction finally got started in March 2020.
The City is under a so-called “time schedule order” or TSO from the Regional Water Quality Control Board to bring its sewage discharges into the ocean under full secondary treatment to comply with the Clean Water Act, in essence to finish the new plant and shut down the old one by Spring 2023.

The tour, led by construction manager Steve Mimiaga of Mimiaga Engineering Group, took the twenty or so attendees on a walking tour of the 27.5-acre site, which was literally carved out of a mountain.
Imagination was needed as he pointed out one area that is leveled, with utilities stubbed in and ready to start on forms and rebar for a concrete slab that would be topped with a pre-fab metal building.
The site would be the new administration building, he said. The slab should be completed by Christmas, he added, and the new building ready to be installed.

For the past several months, Mimiaga said, they had been grading and doing all the underground work, including running the sewer main that will bring the flow to the plant, an 18-inch potable water line for fire safety, and the conveyance pipes that will bring the raw sewage in for treatment and also send the reusable and discharge water back into town.
Currently, the City is planning on injecting the highly treated wastewater into the groundwater basin of Morro Creek at a site on the northeast corner of the power plant property on the west side of Hwy 1.

That site is still not secured, as the City and plant owners, Vistra Energy are in a lawsuit right now with the City seeking to use eminent domain to secure one easement for a new sewer main from Lift Station No. 2 under the Front Street parking lot on the Embarcadero through the plant to the other main line coming from Atascadero Road.
The injection well field site is part of that lawsuit, which Collins said it is close to prevailing in.

The tour continued past huge, welded, steel piping, 78-inches in diameter (6’6”) that will be buried and used to chlorinate unusable wastewater destined to be dumped into the ocean. A roadway will be built over the top of it.
The site ends at two massive bio-reactors — large, poured-concrete basins that will teem with bacteria that will preform the main treatment of the wastewater.

Mimiaga said the bacteria that will be cultivated in the tanks are key to the whole “biological nutrient removal” or BNR process, and if the bacteria ever dies off it will takes weeks to regrow.

The bacteria in the tanks will be there for the life of the plant, he explained. The treatment basins will together have 600 tons of concrete and 28 tons of rebar in their 23-foot walls, with all but the top 10-feet or so buried under the eventual final grade of the site.

Along the side of the entire site is a huge scar in what used to be grassy, rolling hills grazed by cattle. A large portion of the hill was being graded and led to the first major problem with the project when the hillside above started to move.
One official said it was an “ancient” landslide that started moving again after grading removed dirt along the bottom of the hill that was holding it up.

That dirt was spread about the site and becomes part of the over 20-feet of fill that the plant will sit on. By doing that, they saved about $1 million that would have been spent trucking the extra dirt away. They plan to plant grasses to re-stabilize the hillside.
Collins said that to date over 75,000 cubic yards of dirt has been moved on site.

The jobsite has 60-70 people working on it now, and that will increase when the buildings get installed, with plumbers, ironworkers and electricians, among other tradesmen, coming in.
Collins said, “Construction of the Water Reclamation Facility involves dozens of companies and suppliers, and has created over 50 construction related jobs to date. To date, $88.5 million worth of low interest State and Federal loans and grants are in place for the $130 million project.”

He added, “We committed to the ratepayers of Morro Bay that we would complete this project on time and within budget,” said Collins. “We remain on track to complete the project in November 2022 and are pleased to report that current utility rates will not increase despite challenges with project permitting, contracting and land acquisition.”