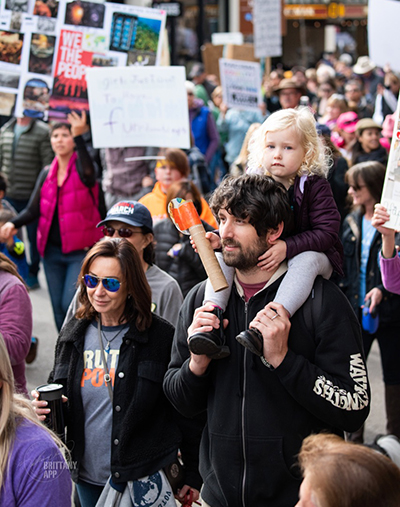 Women’s March SLO is going virtual in 2021 with the theme Power Up Democracy. This photo is from the Time Is Now rally and march in San Luis Obispo on January 18, 2020.
Photo by Brittany App

The message of solidarity remains, but the delivery is different. For the fifth time, Women’s March San Luis Obispo will return to rally, however due to the pandemic, the hour-long event will be held online on January 23, starting at 10:30 a.m. The theme for this year is Power Up Democracy.

“The goal of this particular rally, is to shine the light on what has been happening for the last four years and the ways in which democracy has been chipped away in the United States,” said Andrea Chmelik, Women’s March SLO’s communications director. “We also want to celebrate the election of Kamala Harris, the first ever woman vice president, because it is significant. We believe that all people who joined the Women’s March movement, the Me Too movement and the Black Lives Matter movement all led to the fact that we now have an administration that will be much more diverse”

The recent storming of the U.S. Capital by thousands of supporters of President Donald Trump as Congress met to certify election results add to the importance of the rally.

“We’ve been through an event that was just never expected to happen in the United States,” Chmelik said. “One of the bases of democracy is the peaceful transfer of power. We had a free election. It was an election unlike any other because of the pandemic, but, based on all the evidence that we have, it was a free election where people have spoken and elected Joe Biden to be the next president of the United States. What we have been witnessing ever since the election is the undermining of that process. We do need to remain cautious and careful but not scared.”

The pandemic resulted in curtailed large gathers since spring of 2020 and in subsequent months saw even smaller get-togethers nixed due to the spread of COVID-19. Despite that, interest in the efforts of Women’s March SLO have maintained, Chmelik said.
With a new president and vice president heading to the Oval Office, the organization will continue the Power Up Democracy theme throughout 2021.

Whether it is a sporting event, concert or political rally, it is hard to replace the dynamic of in-person events but Chmelik said, “We will broadcast live on Facebook and YouTube so people will be able to interact and chat. We will be there moderating the chat responding to people and doing our best to bring up that energy. It is not going to be the same, but nothing is the same right now.”

Since January 2017, Women’s March SLO has organized over 60 events, in person and online, from rallies and marches for women’s rights, immigrant rights or gun safety, to town halls, to panels encouraging women to run for office, and more that were attended by more than 25,000 people.

In April of 2020, WMSLO started the virtual “Answering the Call’’ series, featuring women who are making a difference across the Central Coast and beyond. In May of 2020, WMSLO spearheaded #WearAMaskSLOCounty initiative, promoting proper wear of face coverings to slow the spread of COVID-19.

Organizers are asking for RSVPs for the Power Up Democracy to keep attendees informed about the event. For more information about the Power Up Democracy virtual rally, visit womensmarchslo.com or follow @WomensMarchSLO on Facebook, Instagram or Twitter. The event is free, but donations are welcomed at https://womensmarchslo.com/mission-statement/.