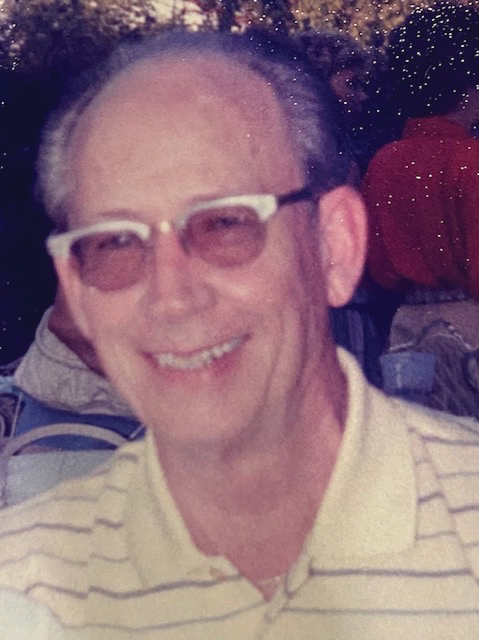 If one were to pass by the southern outskirts of Cayucos, it is possible you may have looked up the side of the hill and seen Fred sitting in his overstuffed recliner gazing out his huge picture window keeping an eye out for passing whales, schools of dolphins or frolicking otters. Nothing gave him more joy than to enjoy all the beauty the Pacific had to offer. Well almost nothing (kids, grandkids, friends, etc, etc,)

Fred Smith was blessed to find love with two women, Virginia, who passed away after 32 years of their marriage, and then LaVerne, with whom he had 42 wonderful years. Between the two of them they had five children (Sandy, Steve, Mike, Denise, Tim), grandchildren, great grandchildren, five generations. Their home was always open to whoever wanted to drop in for a visit, a stay or just a getaway. Important to mention is his dearly loved semi-adopted son, Adrian Hurtado. A true blessing in Fred’s life and was an invaluable friend in every way.

Throughout his life, Fred maintained a love for Jesus Christ and was active in church Bible studies, prayer meetings and other activities, He and LaVerne were much loved by everyone who knew them.

Fred was born Jan. 23,1920 and joined his beautiful wives waiting in heaven on Dec. 22, 2020. He grew up in Rifle and Denver, Colorado. He had two brothers and two sisters. In high school he was a talented gymnast and was offered a scholarship to pursue this talent but his older brother told him this was nonsense and needed to “hit the books” to get a real job.

The beginning of his career with the Fox Theater in Bakersfield, CA was soon interrupted by his call to active duty with the Coast Guard in WWII, but he returned to the Fox afterward. Fred somehow survived the Great Depression and had so many stories to tell about those years. He went through times of living in the dressing rooms behind the stage at the theater and, over the course of this job, met numerous movie stars such as John Wayne and Ward Bond.

Going back to school on the GI bill, Fred achieved a degree in accounting and a public accountant (PA) accreditation. He went on to work for Wayne’s Dairy, W.B. Camp Farming and Kern Machinery, where he remained until retirement. He was a true asset to any position he held and was greatly respected by all.

It wasn’t too long after he married LaVerne that they built the house of their dreams in Cayucos. They adored the weather, and Fred spent many days walking the beaches simply enjoying his life. And quite a life it was. Just shy of the age of 101, by 1 month, he simply had to settle for an even 100. Though he was extremely proud of renewing his driver’s license until age 105.