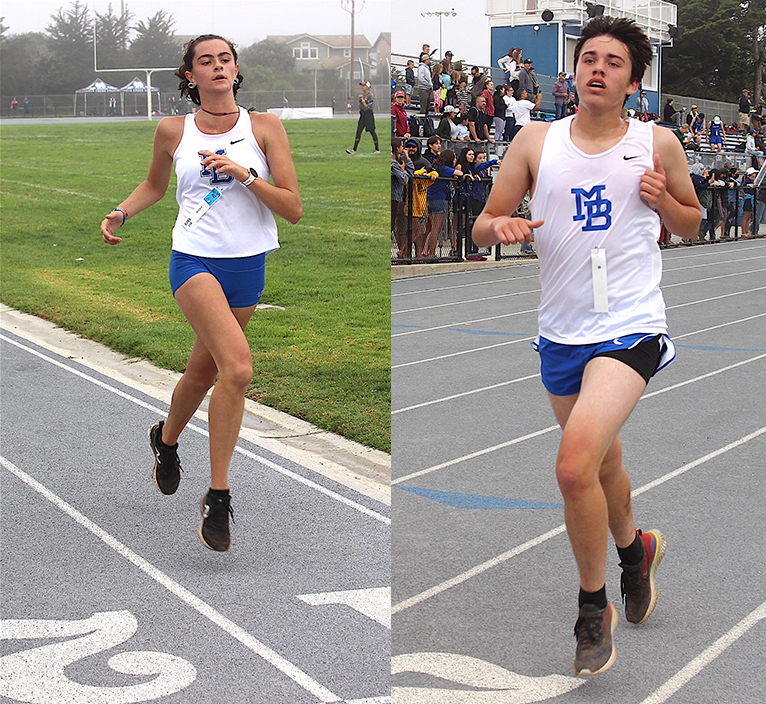 The Morro Bay High Cross Country teams hosted their annual invitational meet Sept. 11 with dozens of schools coming from near and far to challenge the course’s trek through the beach sand and themselves.

Coach Chuck Ogle said, “It was great to have the Morro Bay Invitational back. I frequently hear from coaches that the ‘Invite’ is their athletes’ favorite event, and our community of parents and alumni enjoy putting it on. We had great volunteer support this year as always.”
The meet was canceled in 2020 because of the coronavirus pandemic, indeed the whole 2020 fall cross country season was shelved, though they did have a limited season last spring.

“Both teams [boys and girls] feature many new faces,” Coach Ogle said, “some with distance backgrounds and some without. The freshman groups look promising.”

Morro Bay High sophomore, Annie Wieck, led the Pirate varsity girls taking 33rd place in the race that had 157 runners and clocking 21:33.9.
Coach Ogle said Wieck, “seems poised for another good season. The Ocean League did not announce all-league teams for last year’s mini-season, but Annie would have been, at minimum, a second-team selection. She then went on to an excellent track campaign, winning the Ocean League title in the 400 and qualifying through to CIF Finals in that event, clocking a 62.0.”

“Michael [Carbajal] is one of the strongest and most aerobic athletes we’ve had in the program recently and had a strong summer of training,” Coach Ogle said. “It looks like he will have good support from Charlie Inman, a senior veteran who is running with determination, and a collection of rookies including senior Andy Halaand, another proficient 400-meter athlete. We like to see the track sprint crew running cross country as it provides a strength base they can’t really match doing anything else.”

The Pirates had very good success in the jayvee/novice races. Freshman, Eli Waldman, finished ninth in the boy’s race, covering the 2-mile course in 14:04.1 and earning a meet medal. There were 77 runners in that race. Freshman Jack Walker also medaled in 13th place and 14:24.9. Freshman Frankie Ainley was 17th in 14:35.9.

In the girl’s freshman/novice race Mika Hegg medaled in ninth place clocking 16:05.3; and Freshman, Rheanna Dunton, was 15th in 17:46.6 and also took home some hardware. There were 52 in this race.

And junior Gavin Brush ran in the junior varsity boy’s race clocking 37:47 in his first-ever cross country race.
The Pirates were scheduled to travel to Santa Maria’s Waller Park Sept. 18 to run in the Goose Chase Invitational. Coach Ogle said “the entire Ocean League will be competing so we will get a good early-season look as to where we stand.”