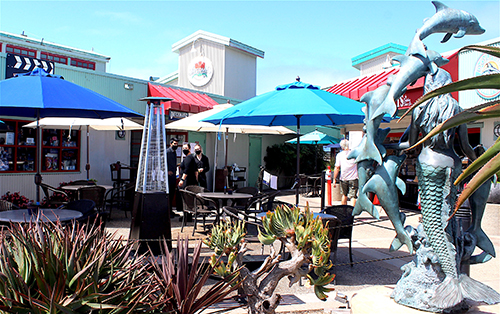 The shutdown of the economy and shelter-at-home orders coming out of Sacramento have devastated local economies including Morro Bay’s. But resilient business owners are adapting to try and meet the restrictions and guidelines and still remain open.

Morro Bay’s restaurants have been busy setting up outdoor eating spaces in parking lots, decks, plazas and in one case along the Harborwalk.

In the photos here, Great American Fish Co., has seating along the front of the building and in a patio adjacent to the front doors.

Giovanni’s Fish Market has opened a new takeout window in the space that used to be The Coffee Pot Restaurant until recently when the owner decided to retire and give up the business.

Owner Giovanni Degarimore said in a social media post that the new takeout window was so that local residents wouldn’t have to wait in the market’s ordinarily long line at the first takeout window. He’s placed tables and chairs in part of the parking lot out front and along the water, but owing to the popularity of the place, long lines are forming there too.

Nearby, Stax Wine Bar has put tables out front.

Rose’s Landing is making use of an outdoor pocket park/plaza, even as the second story is being transformed into motel rooms. Associated Pacific crane barge has been setting pilings along the waterside for floating docks and boat slips.

Dutchman’s Landing has put tables in a small plaza in the middle of the lease site and along a breezeway between the two buildings.

And Carla’s Country Kitchen on Beach Street, which already had a small patio, has used hay bales to delineate an outdoor seating area in its parking lot. Hungry Fisherman, also on Beach, is using some of its rear parking lot for seating.

The City put a couple of picnic tables in Giant Chessboard Park, believed to be the ones they removed from the Shasta Avenue Pocket Park after homeless people started congregating there and smoking cigarettes.

And of note in North Morro Bay, Maya’s and Taco Temple have set up outdoor eating areas in their parking lots. Taco Temple erected a stylish, wood-framed patio topped in palm fronds for a decidedly tropical look. It too is getting a lot of use out of an existing outdoor seating area.

Some restaurants, notably Thai Bounty on Embarcadero, Mi Casa on Morro Bay Boulevard and Bayside Café, among others, already had large outdoor dining areas, with Bayside Café expanding into its parking lot at the State Park Marina to make up for unusable indoor dining.

The creativity and change in atmosphere that’s come with the adaptations has given diners a fresh experience, even at their favorite haunts.

It should be noted that most all restaurants in town are open for takeout and many will deliver, too. It’s hoped that locals and visitors will turn out to help the nearly 50 restaurants in town to survive the pandemic closures so they can continue to provide jobs and tax revenues to the City.

The inter-connectedness between businesses and the fiscal health of the City government and in turn on the quality of life enjoyed by residents has never been so exposed or tenuous.

[adinserter name="Link Test"] Zelle Diefenderfer, known as the Queen of Baywood Park and a founding member of the...