Shari part of local community news since she moved back to the central coast in 1998. Her family connection to the central coast go back to the 1940s when her grandparents moved to Shell Beach and owned O'Connor Buick in downtown SLO. She is also an artist, herbalist, yoga teacher and certified health coach, and with more than a decade of marketing experience.


Zelle Diefenderfer, known as the Queen of Baywood Park and a founding member of the Baywood Park Women’s Club, was put in charge of renting the boats by Mr. Otto. She told me she had a bell set up in her house so that when help was needed with the boats, it would ring and she could make herself available and tend to the situation. She also sold groceries to visitors and shotgun shells to the hunters.
A third pier was built by local residents between the end of First and Second Street before 1955. It was eventually removed because of its flimsy construction.
A fourth pier was built.in 1955. Richard Otto offered to match every dollar raised by the Chamber of Commerce. When enough money was raised it was built. This was the beginning of the current pier.
In 1975, County Supervisor Elston Kidwell was concerned about repairing the pier and $1200 was received by the County Revenue Sharing Committee for the project.
In 1983 a storm destroyed the pier. To purchase the materials, Baywood Park Chamber of Commerce and the Downtown Baywood Park Business Committee formed a group and raised $5,628. Local businesses and tradesmen donated time and money to rebuild the pier. The county waived construction and building fees.
Today the pier is maintained by the Baywood Navy.
And that’s another story.
Reference: Tim Frein, Commodore of the Baywood Navy 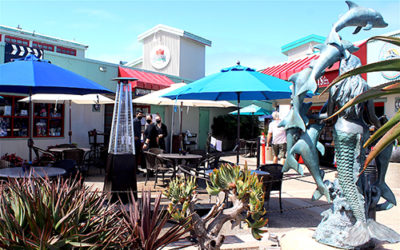 Dutchman Seafood House The shutdown of the economy and shelter-at-home orders coming out of Sacramento have devastated...