Lady Maxine Floated and Towed to her Grave 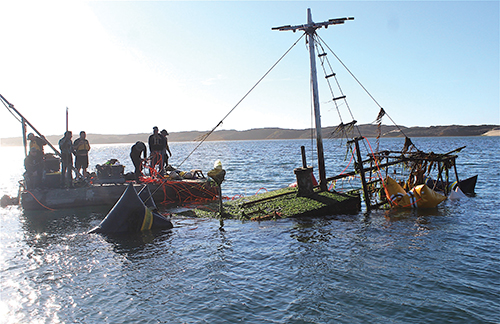 She stuck stubbornly to the bottom of the bay, the final resting place for a once proud commercial fishing vessel. But the Lady Maxine was eventually floated again, towed to the launch ramp where an excavator dragged her up to be crunched into a millions pieces, loaded into a dumpster and hauled to the landfill.

It was the final end to the saga of another of Morro Bay’s aged fishing fleet.
The Harbor Department had brought in Jim Sanders of California Marine & Salvage to try to raise Lady Maxine immediately after she sank in late July, but they were unable to float the wooden hulled vessel.

They did however remove the boat’s outriggers and other gear, which lessened the dangers to navigation from the sunken vessel.
So she sat for a couple of months, with just the main mast sticking above the surface until help arrived on Wednesday, Nov. 10.
That’s when the Sheriff’s Dive Team came out and working off the Harbor Department’s work barge, was able to deploy enough lift bags to re-float the vessel, where the Harbor Patrol tied her off to a patrol boat and towed her to the launch ramp.

Negranti Const., was waiting with an excavator to finish her off.
But not so fast, the little wooden vessel said. She wasn’t quite ready to meet her demise.
While towing the boat to the launch ramp, she got stuck and sank again.
The launch ramp, which is made of concrete, comes to a sudden stop about 5-feet off the bay bottom. The Lady Maxine’s bow got caught on that little hump and she refused to budge.

The next day, Nov. 11, the dive team returned and repositioned the air bags to raise the bow enough for the excavator to grab hold. And on Friday morning, Nov. 12, she was dragged onto shore and Negranti’s excavator did its work.
It was the second boat to be destroyed, as Negranti also made quick work of another derelict 41-foot sailboat that had also begun to sink and be a potential pollution problem in the bay.

That boat apparently went along quietly.
The Lady Maxine’s deteriorating condition was well-known to the Harbor Department, as the Coast Guard had long ago removed all the fuel and oil and other potential pollutants from the boat. So when the ship sank, after a pump stopped working, it didn’t need to have an oil containment boom encircling it.

However, as she was being freed from the muck of the bay bottom, she did release a small amount of fuel or oil causing a minor sheen to escape the vessel.

The Lady Maxine marked the third derelict boat the department had to deal with since July. They had also, previous to the Lady Maxine’s demise, dealt with a steel hulled boat, the “Big Traveler,” which had partially sunk in 2020 while tied to mooring in the harbor.

A diver had patched the hole in her hull and she was moved to the Harbor dock at the North T-pier where the owner had removed what he wanted from the boat. They cleaned up Big Traveler, removing all fuels, oils and hazardous materials and were given permission from the Federal EPA to sink her offshore.

Harbor Director Eric Endersby said Maritime Logistics was hired to tow her 50 miles offshore on Aug. 15 and sink it creating an artificial reef.
In the photos, the Sheriff’s Dive Team uses airbags to re-float the Lady Maxine so she could be towed to shore and destroyed.