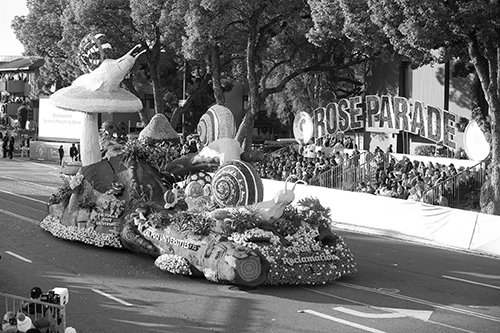 Cal Poly universities’ ‘Road to Reclamation’ received the Extraordinaire Award for the most extraordinary entry among the parade’s 39 floats. It was the schools 62nd award in 74 parade appearances since 1949.

Cal Poly universities’ “Road to Reclamation” float that takes a small scene on a forest floor, featuring animated snails and colorful mushrooms, and blows it up to gigantic proportions received the Extraordinaire Award at the 134th Rose Parade on Jan. 2.

“I am so proud of everyone on this team and all the hard work they put into making this happen,” said Doody.

The entry exemplifies the parade’s 2023 theme of “Turning the Corner” — celebrating the unlimited potential that each new year brings. “Road to Reclamation” transforms a small scene in nature and magnifies it to bigger-than-life proportions showcasing nature’s regenerative power.

It stood out among other entries because of its cuddly assembly of colorful gastropods. Snails are very important to their ecosystems as they consume dead leaves on a forest floor and ultimately return it to the environment as soil. In addition, snails are a great food source for other creatures in the food chain.

Mechanical engineering student Benjamino Cruz, a four-year member of the Cal Poly team, submitted the original concept for “Road to Reclamation.” Cruz is the San Luis Obispo team’s construction chair who oversaw the yearlong process and drove the float on the 5.5-mile parade route.

“That’s big — that’s big,” Cruz said of the honor. “It just gives us a solid idea that we really achieved something.”

Earning another award is more than icing on a cake, it’s a form of validation for a year of hard work by scores of full-time students who also moonlight as part-time float builders on the two campuses, he added.

The animations on the float brought to life the three largest snails. Along with moving eyestalks, the front and back snails had articulated necks. The front snail was devouring a leaf, while the back snail put on a show of its own. It rode a flat-topped toadstool to a height of 25 feet; from its vantage point the snail’s head moved to gaze at parade-goers as the float rolled along. A trio of small “baby” snails moved in a circle on the branch as if chasing each other. Finally, three ladybugs scattered across the diorama unfurled wings in preparation for flight.

“This year one of the things our electronics team has been working on is actually redesigning an animation system,” Doody said. “They’ve written some script, and they’ve been figuring out how to connect hydraulic cylinders and motors to it so they actually will be using this new animation system for the parade. We’re all very excited about it.”

More than 70 students, equally split from each university, worked to finish the float, aided throughout the year by hundreds of student volunteers who turned out to assist on campus float workdays.

“Our student float builders combine the best of NASA innovation and ingenuity with the gee-whiz enthusiasm of a Broadway show; I couldn’t be prouder of them and their justly acclaimed reputation as dreamers, designers and float builders,” said Cal Poly President Jeffrey D. Armstrong, who was in Pasadena to watch the parade.

The Poly entry was one of only six self-built entries in this year’s extravaganza. The parade included 38 other floats, including one for the Royal Court and each of the Rose Bowl teams, Penn State and the University of Utah, as well as 21 marching bands, 16 equestrian units and the 2023 grand marshal, former Arizona U.S. Rep. Gabby Giffords, whose recovery from a January 2011 assassination attempt epitomizes the parade’s 2023 “Turning the Corner” theme, organizers said.

Rose Paradeofficials estimate that 700,000 people saw the event in person, while last year 28.5 million Americans and a worldwide audience estimated at 28 million watched it on TV. In 2022, viewers in 70 nations tuned in to the coverage.

The students’ creativity extended to the decorations. Shifts of students and decoration volunteers in the week before covered the entire visible surface of the 18- by 55-foot float with an estimated 20,000 flowers and natural materials.

The branch rested on a forest floor of mixed greens including student-grown clover mats, interspersed with mixed verdant floral and foliage — green roses, green trick, kale and ferns. Reflecting the float theme of renewal and giving old materials new life, the branch bark was real: donated and foraged ponderosa pine and redwood bark. Between bark slabs of was dried moss or floral material that represent mosses and lichens. Chrysanthemums, kale and Gerbera daisies, among other materials, helped create the effect.

Snails were festooned with a variety of materials — chrysanthemums, carnations, nuts and roses. Deep-purple carnations were used on the tallest snail. This “moonshade” variety is not a color commonly found in floral material.

Mushrooms were topped with such materials as mums, carnations, roses, flower petals, fresh produce, seeds and beans. To achieve interesting textural elements on the mushrooms, students used slices of eggplant, orange slices, cabbage leaves and other produce, along with dried, sewn-together cornhusks for the ruffled mushroom gills. And the ladybug shells were covered with cranberry halves that provided a dimpled surface of one of the entry’s animated features.

For more information about the parade, visit www.tournamentofroses.com.