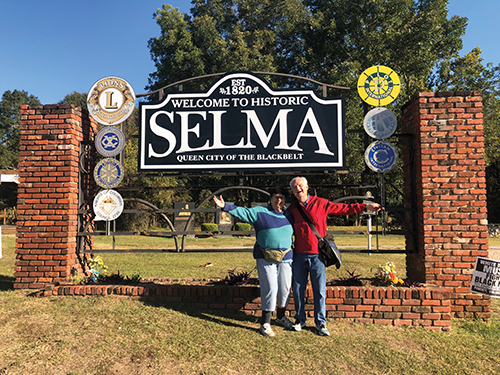 In the mist of an early October morning, they stood on the Edmund Pettus Bridge in Selma, Alabama reflecting on that day in 1965 when thousands joined Martin Luther King, Jr. to march for freedom for Black residents of the Deep South.

Gina Whitaker, president of the People of Faith for Justice SLO, and her husband, Ken Hill, of the Central Coast Center for an Ecological Civilization were participating in a Living Legacy Pilgrimage. Now they are sharing all they learned on this U. S. Civil Rights Trail by presenting a program entitled “Weaving Our Garment of Destiny” on Sunday, January 15, at 3 p.m. at the Unitarian Universalist Church, 2201 Lawton Avenue, in San Luis Obispo.

Whitaker and Hill participated in Reggie Harris’ Mississippi Living Legacy Pilgrimage that took them along the Civil Rights Movement of the 1960s. They learned how events occurring in Mississippi and Alabama during that time were primarily responsible for the passage of the 1964 Civil Rights Act and the 1965 National Voting Rights Act. King, who had been working on nonviolent actions for almost two decades, successfully held the huge Selma to Montgomery march in 1965 after the violence of the first attempt, which came to be known as Bloody Sunday.

Their program on MLK Sunday consists of attendees singing songs of the era as well as Whitaker’s and Hill’s in-depth reflections including “Early Morning on the Edmund Pettus Bridge,” telling of their experience walking across this historic structure. Whitaker offers “The Long Ride to Freedom,” the story of the Freedom Rides and Rosa Parks’ refusal to give up her seat on the bus. Then Hill will speak on “Faith and the Movement,” and they both offer “Our Shared History: Continuing the Journey to Freedom” as we deal with present day racial tensions.

Whitaker is prompt to note that the presentation is not a travelog but is a presentation of spiritual and personal reflections she and Hill had as they toured places like the Bethel Baptist Church, a National Historic Landmark, the civil rights sculptures in Kelly Ingram Park, and the 52-mile trail to Montgomery that began at the Edmund Pettus Bridge in Selma.

“We learned about the Living Legacy Pilgrimages (www.livinglegacypilgrimage.org) through singer songwriter Reggie Harris (www.reggieharrismusic.com) and realized how wonderful and educational a tour of this area in the south could be,” Whitaker explained. “Sites in the Mississippi Delta where so much loss of life and struggle went on, and in Alabama like Selma, Birmingham and Montgomery were places we’d heard about long ago. We felt it was important to see the actual sites and hear the stories.”

People of Faith for Justice returns to their yearly honoring of Martin Luther King, Jr. on this weekend in January after a three-year absence and does so in collaboration with Yes! We Can Peacebuilders and the Central Coast Center for an Ecological Civilization.

“We are happy to present this program on the power of nonviolence over violence,” Whitaker and Hill said.

Learn more about People of Faith for Justice at www.peopleoffaithforjustice.org and Yes! We Can Peacebuilders at www.yeswecanpeacebuilders.org.