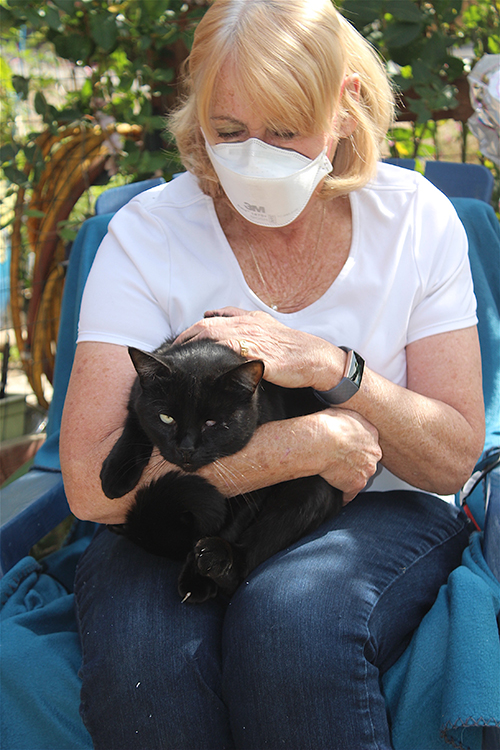 Wendy Kurczewski poses with Pirate, one of her two cats that were recently shot by someone with a pellet gun. Bandit the other cat, died from his injuries. Kurczewski is offering a $1,700 reward for the identity of whoever shot her pets.
Photo by Neil Farrell

Someone is shooting cats in Cayucos, wounding one, killing another, and breaking two people’s hearts in the process. Now a reward is being offered for information identifying the pet murderer.

Wendy Kurczewski and Bob Schaum are long-time residents on Shearer Avenue, and somewhat famous for turning their home into a “Kitty Castle,” with fenced enclosures front and back, and all around, too. It’s a cat utopia where the animals can roam around, climb, and well, be a cat, until recently.

Kurczewski explained that about 2 months ago, one of her cats, Pirate, a large black tomcat, showed up at the house limping. There were no bites on him, she said, which might indicate Pirate got in a fight. But all of their cats are spayed and neutered, which tends to take the fight out of them. “So we took him to the Atascadero Vet Hospital,” she said. An X-ray found that he’d been shot with a pellet gun.

“The pellet entered his hip,” explained Kurczewski, who is a retired nurse from the State prison system, “and lodged in his knee.” Surgery removed the pellet and they called the Sheriff’s Office.

“He said he’s been on this beat for 13 years,” Kurczewski said, “and he’s never been to this neighborhood on a call.” The South Cayucos neighborhood, where she’s lived since the early 1980s, has changed quite a bit over the years. Gone are many of her elderly neighbors, either having died or sold their homes and moved away. They were the folks who sought out Bob when they had little things that needed fixing or help with just about anything.

There are a lot of second homes and vacation rentals now, which she’s never had any troubles with. A crime report was filed but there wasn’t much the deputy could do, except to warn his fellow patrolmen about the incident and be looking out for anyone out shooting a pellet gun.

Then on Nov. 2, the cat shooter struck again, this time killing Bandit, one of her beloved pets.
“It was about 2 in the morning when we heard this awful howling outside the door,” said Kurczewski. It was 3-year-old Bandit, who’d wandered home leaving a trail of blood. “We realized there was blood,” she said. “We wondered if he’d been bitten or hit by a car? There was blood on the kitty door and all over the floor, so we rushed him to the emergency vet [Atascadero Vet Hospital].”
The hospital determined Bandit too had been shot. “They did everything they could for him,” Kurczewski said, tears coming to her eyes and disappearing down into her COVID facemask. “But they couldn’t save him.”

The pellet had clipped Bandit’s heart and tore up his insides. “Normally, we don’t go to extreme measures,” she said, “but he was a young healthy cat. He was our pet.”

Once again the Sheriff was called and once again a sympathetic deputy took another report. This guy was angered by the repeated acts of cruelty. Shooting someone’s pet cat is a felony.

“They were very kind,” Kurczewski said. “They said, ‘Get us some leads’ to follow, and ‘This is not acceptable.’”
So she did something she said she’s never done before — turn to social media, the Nextdoor gossip site, where she headed her post, “CAT KILLER in Our Neighborhood.”

The many messages of sympathy and support she got in return were very touching. “People are very supportive,” she said. They’ve offered reward money and to help in whatever way they can. “It happened late at night on a Sunday. This area doesn’t have a lot of full time residents anymore. We’ve never had this problem, ever.”

She explained that 6-years ago, she and Bob moved to Susanville, in the Sierra Nevada where she’d taken a job at a State prison facility. She was a nurse instructor for some 8 years and moved to different prisons. Her love of cats and the fact that every State prison has some level of stray cat issues, “I became known as the cat lady,” she said with a smile.

At prisons like Avenal, CMC, Tehachapi she started programs to catch the strays and get them fixed to stop overpopulation. Having some cats around as mousers is a good thing for any large institution, a sort-of natural vermin control. But un-fixed animals can reproduce amazingly fast, with cats having multiple litters a year.

In Susanville, she said, they lived in a house by a bridge over a river. It was the place where people dumped cats all the time. So she started a non-profit group to catch, fix and adopt out the cats people discarded like trash. They turned her backyard into an enclosed cat menagerie, using straw bales to build a play and hide structure.

“Lasen Animal Spay/Neuter Assistance, Inc.,” quickly grew in volunteer support and reach, bringing attention to a problem that is practically everywhere, abandoned or, lost pets living miserable, feral lives and reproducing exponentially.
“I don’t know how many cats we spayed and neutered,” she said. “People just kept dropping them off at the river — at our house. We ended up with a lot of cats.”

The group was funded with donations as well as a lot of yard sales and cupcake sales, collecting bottles and cans for the deposits. It ended about 18-months ago after the group went their separate ways. About a year ago, she retired and they moved back to the Kitty Castle house in Cayucos.

And now, she’s faced with someone nearby who is apparently into animal cruelty, which she said is not a desirable trait in any human being. The Kitty Castle works well but cats are escape artists and some of their cats are wild.
“We have some feral cats that we can’t touch, but Bandit was not one of them,” she said. “Some of them will not come in the house at all.”

And what a house it is, with enclosures front and back, with ramps that go up to the second story where the deck is also enclosed with wire mesh. Here a cat can be outside but not be roaming loose. “We’ve gone to great lengths,” she said, “and then somebody kills them on purpose.”

Pirate, who survived, came to them via the highway. “Someone found him on the side of the road and gave him to Bob,” she said. The cat had a badly injured eye and so “Pirate” would seem like a fitting name for a 1-eyed cat. He’s left with a limp but otherwise has recovered from being shot.

Bandit’s killing led to them offering a reward. “Bob and I put up $1,000,” she said, “and people have donated to it.” The reward stands now at $1,700 for information on the identity of whoever shot their pets.
Most rewards require a conviction, but Kurczewski said they don’t even care about that. They just want to know who killed Bandit. “So long as they ID the right person,” she said, “I’ll give out the reward. We’re sure it was a pellet gun, which can do a lot of damage. It could kill a person.”

“We’re hoping that it’s enough money that if someone’s conscience doesn’t turn them in, they’ll do it for the money. Money does talk.”