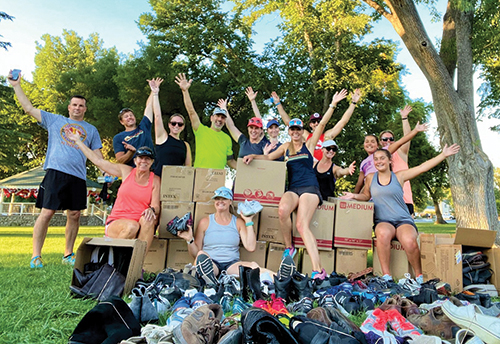 In and effort to help people in need around the world, more than 300 pairs of gently worn and plenty of new shoes were collected and donated to an organization with international foot steps.

Sergeant Nicole Taylor of the Morro Bay Police Department and Rosalie Smith, a Twin Cities Community Hospital emergency nurse, put together a “Soles4Souls” shoe drive together and brought in 300 pairs of shoes, far exceeded their hopes of donating 200.

“The amount of shoes we received was astounding,” said Taylor. “It was way over our expectations. It was amazing to see the outpouring of support from the local communities for such a good cause.”

The shoes collected get funneled to developing countries, where people start small businesses to sell them, which, in this case, can provide food, shelter and education for a family for five months, according to the Soles4Souls organization’s website.

Additionally, by donating shoes that are taking up space in your closet has a significant impact on the environment as well. The 300 pairs of shoes collected will help save approximately 9,000 pounds of carbon dioxide emissions release when new shoes are manufacture and keep 375 pounds of textiles out of landfills.

Smith and Taylor, founders of the Templeton Run Club and coaches of the cross-country program at Templeton High School, hosted the month-long shoe drive as part of Global Running Day on June 2.

“We felt Soles4Souls was a reputable organization for us to donate to, also it dealt with shoes and since we run a lot, we have a lot of shoes,” Taylor said. “We wanted to find a group that would really make a difference.”

Soles4Souls, a non-profit organization that creates sustainable jobs and provides relief through the distribution of shoes and clothing around the world. For more information, go to Soles4Souls.org

The Templeton Run Club consists of local community members including many nurses, doctors, and staff from Twin Cities.