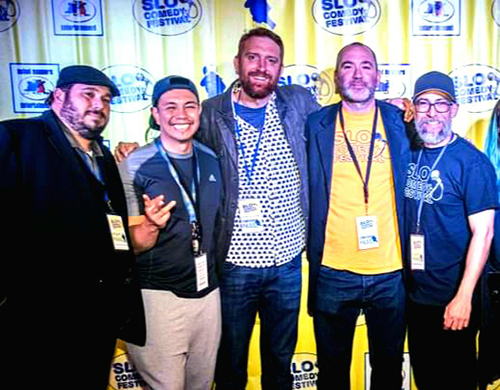 It is said that laughter is the best medicine, and the SLOFunny Comedy Show could be the feel-good dose we all need these days.

Los Osos resident Brian Anthony started the once a month, live stand-up show at the Veterans Memorial Building in Morro Bay after about 10 years learning the ropes with the SLO Comedy Festival.

“Most of the surrounding towns have regular comedy events, but my home town of Morro Bay hasn’t really had a steady show,” Anthony said. “I thought it was time to start something, and I wanted to do it right. I love comedy. While the SLO Comedy Festival has birthed the Central Coast into a great place for comedy, there still isn’t a real showcase comedy venue in the area, certainly not in Los Osos, Morro Bay or Cayucos.”

On June 25, the SLOFunny Comedy Show returns with it third show featuring. Adam Yenser, from the Ellen DeGeneres Show, is the host and the lineup features Brett Riley, the former face of the Golden State Warriors, along with Sina Amedson and Nick Cobb. Suli McCullough is the headliner. Suli is a veteran writer and comedian who has written for the Emmy Awards, “The Tonight Show with Jay Leno” and “George Lopez Tonight.” Readers might know him as Crazy Legs from the 90s Comedy: “Don’t Be A Menace to South Central Without Drinking Your Juice in the Hood.”

Shows are R-rated, so 18 years or older. Tickets are $25 cash at the door, but are slightly discounted when purchased online at Eventbrite or My805Tix. There are two shows — 6:30 and 9 p.m.

Estero Bay News did a Q&A with the 45-year-old who grew up in Los Osos helping with the family business, the now-shuttered, iconic Owens Music Company, which had a 50-year run in San Luis Obispo and Santa Maria renting, selling and repairing instruments.

Estero Bay News: Why did you choose comedy as a local promoter over music, art or theater?

Brian: Art and theater have their place but require even larger venues to be done correctly. As for music, the Siren does an amazing job with concerts already and the smaller venues are offering plenty of opportunity for  performers. Places like Three Stacks and a Rock, Libertine, Staxx Wine Bar and Sweet Springs are already doing a great job.

EBN: What do you think is the importance of comedy, and has that “need” changed over the past few years?

Brian: Comedy is probably the most important art form, in my opinion. Once we have lost our ability to laugh, we lose our ability to hope. Over the past few years, we’ve slowly lost our ability to hope, to dialogue or even tolerate anyone who thinks a little different. But, thanks to the humor of Monty Python, we know that when some things in life are bad, but always look on the bright side of life. I’m paraphrasing.

EBN: Are you a comedian or have you tried stand-up?

Brian: Truthfully, I would love to be a standup comedian, and I enjoy making people laugh. Unfortunately, I prefer working behind the curtain and not on stage. Thankfully, that is exactly what the area needs in a show runner. Nearly every other show on the Central Coast is run by someone who wants to be a comedian or a bar just trying to bring in patrons to drink. We need an outlet that focuses on comedy and entertainment value first.

EBN: What do you consider funny?

Brian: That seems like a loaded question. My tastes are widely eclectic. I enjoy all types of comedy.

EBN: What should people expect from one of your shows?

Brian: First and foremost a diverse range of comedy. Hopefully, something that will fit everyone’s tastes. Every SLOFunny Comedy Show has five comics with differing styles of comedy; though I do try select comedians that, while diverse, do compliment each other. They are also professionally- touring features and headliners.

The shows are rated “R’ because I don’t want to censor the comedians. I can’t guarantee nobody will get offended, but the comedians I work with are not overly crass or vulgar.

EBN: After the Chris Rock and Dave Chappelle incidents, some comedians have said that being attacked physically or threatened has become more frequent. What are your thoughts on that?

Brian: We live in a very different world today. It’s sad to think someone would come to a show just to cause a scene or create turmoil. Unfortunately it happens, even locally.

EBN: What would be your dream show?

Brian: Firstly, I’m fortunate to have met some amazing talent over the last 12 years. I’ve dreamed up each one of these lineups, with a few changes that always seem to improve upon the show. But, my dream is already happening on a small scale — 50% of the audience at our second show was at the first show, and 10% of them have already bought tickets to this month. My dream is to have everyone on the Central Coast experience the joy and laughter these comedians have brought to me. I said before, I don’t want to be on stage, but I do want to make people laugh.

EBN: Are food and drink for sale at the shows?

Brian: There is always some form of concessions. Last month, the Morro Bay Lions Club provided nonalcoholic concessions. This month’s they will be adding beer and wine. I’m hoping to find a local brewery that can sponsor their involvement in the event. While it adds to the show, I like offering the opportunity to a local civic organization to help them raise money for all the important things they do for the community. As for food, there may be candy or snacks, but the show is designed as a theater show and not conducive to dining.