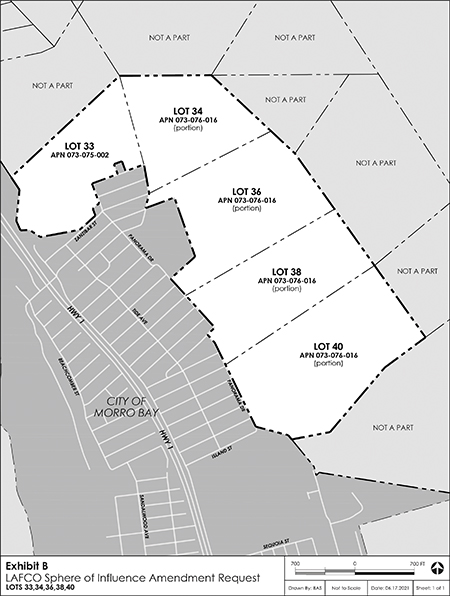 The map shows the location of the five Panorama Lots to be discussed by LAFCo., on Jan. 20. Map courtesy City of Morro Bay.

The City of Morro Bay is moving on amending its “sphere of influence” to bring several residential lots on Panorama Drive into its fold.

The City applied to the Local Agency Formation Commission (LAFCo.) in November to expand its sphere of influence (SOI) to include some 212.81 acres — six buildable lots — of what used to be part of the greater Chevron Estero Marine Terminal property, which starts at Toro Creek to the north and goes southward and includes much of the area on the western edge of North Morro Bay and east of Del Mar Park.

The six, so-called “Panorama Lots” were part of a deal the City cut with Chevron to allow some development on the vast terminal lands, and included the purchase of Dog Beach and the future conservation of the canyon east of Del Mar, which is drained by Alva Paul Creek.

The SOI is in essence an area on the edges of a city where the city’s services — water and sewer — are likely to be extended into and also designates areas that are likely to some day be annexed.

It’s also a means for stopping urban sprawl that might occur if a property owner adjacent to a city went to the County to develop their land. If it’s within a town’s SOI, the town has a big say in how it gets developed.

The Panorama properties and the City’s efforts to expand its SOI have been met with lots of opposition.

“Our main concern,” said Yvonne Bruckner, who is leading the opposition to the SOI designation, “is that this area is identified as geologically hazardous by the City of Morro Bay, San Luis Obispo County, the State of California, and U.S. Geological Survey. These slopes have a history of landslides and we have observed many areas of slippage throughout.”

She pointed out that this hillside is the same composition as the Water Reclamation Facility’s (WRF) new treatment plant site, which sustained a sizable land slip early on in construction.

The same geology is in Southern Cayucos, the so-called “paper lots” at Hwy 1 and Toro Creek Road. The County declared those lots unbuildable because of the steepness and over landslide concerns and has been buying them up in tax lien sales for years. Indeed, retiring all of these lots is a main goal of the Cayucos Land Conservancy.

She also argues that the open hillsides are wildlife areas. “These lots are used as a migratory route for many coastal birds, raptors and mammals,” she added. “Development of these lots could destroy this precious habitat.”

And Panorama Drive is too narrow and in disrepair. The City’s Pavement Management Plan, Bruckner said, “has favored the main arteries and neglected our neighborhood streets, which are crumbling in disrepair. Panorama Drive, which runs along the base of these lots is very narrow and would require cutting into the hillsides — a known cause of landslides — to widen.”

Bruckner said she has petitions with some 1,000 signatures, mostly from folks in her North Morro Bay neighborhood, opposing the SOI designation, which in and of itself, doesn’t mean the property will be developed, but is a first step in that direction.

She said Chevron wants the SOI designation to increase the land’s value for sale. “Bottom line,” she said, “Chevron wants these lots in the city so they can get more money for them. The Panorama lots are essentially the sacrificial lamb of the Toro Coast Preserve/Beach lot acquisition plan.”

Community Development Director, Scot Graham said, “Any future development of the properties would require submittal of a soils/slope stability report to address any slope stability issues.”

The Panorama lots were included in the City’s recently updated General Plan.

The lots along Panorama Drive hillside has a history of moving downhill during heavy winters. Indeed, on more than one occasion (1988, 1995 and 2005) in the midst of very wet winters, the hillside above Panorama began to move and damaged the foundations of several homes below.

An investigation by Chevron after the area moved in 1995 and burst the Whale Rock water pipeline, concluded that the hillside was subject to movement when the rain totals are over 30 inches, a total that usually happens with the infrequent El Niño weather patterns.

The SOI request would begin the reversal of an action in 2007 by LAFCO., that stripped away all of Morro Bay’s SOI because it had done nothing in decades to go to the next step and annex the properties.

So the City has been bereft of any SOI for nearly 15 years but that’s likely to change substantially, as there are several properties that the City is supposed to try and bring into its SOI — the Tri-W Property adjacent to the City’s new sewer treatment plant; and another large parcel adjacent to the plant that the owners hope to subdivide and develop; as well as the plant property’s nearly 40 acres.

Those properties are apparently not part of the current LAFCo., work.

The web address for the meeting is: https://us06web.zoom.us/j/81757623348?pwd=cGQyRC9LZi9ra3c5eWpMS1lyT3Zudz09 or see: www.slolafco.com and follow the link to the meeting sign in. The agenda should also be posted on the website.