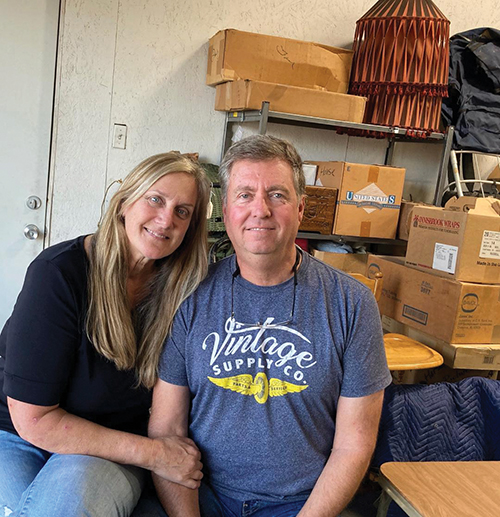 If you look around your home, you will probably notice gently used belongings that will never be used again. Maybe you’ve decided to downsize, found your next home, but dread the packing you’ll have to do before the move. Maybe you’ve lost a loved one, and it’s simply too hard—too new—to deal with what you know you need to do. Or maybe you’re a collector and have maxed out your storage and need to clean out before you find new treasurers.

Remember, these are your treasurers and if you’re overwhelmed by the process and need help, I have a word of caution – do it yourself! Or better yet make sure you find the right professional to help you. I’ve heard horror stories.

Morro Bay is lucky to have Doug and Jen Little, who own and operate SLOCal Estate Auctions, an online service. They have spent years helping others move forward to a next home, career, or to say bon voyage to treasures they no longer need.

Early in their marriage they lived in Redding and traveled city to city with antique shows. The Littles had assembled trusted dealers they would purchase from and resell the products. Cayucos has two such antique shows annually.

The Littles, including their son Christian now in middle school, relocated to Morro Bay where they had family when Jen accepted the Director of Tourism position with the City of Morro Bay. Doug opened Junque Love at the prime corner location of Marina Square on the Embarcadero. Doug said they enjoyed finally living in one place – especially a smaller community like Morro Bay.

They enjoyed getting to know locals at the shop and building the tourism visitors for the city, many of whom would find treasurers at home and return to bring them to Junque Love to see if Doug might want to sell them. He was also able to stock inventory he already had acquired and continue to keep relationships with his dealer contacts to buy additional inventory.

And then March 2020 happened. When California discouraged tourist travel, the City of Morro Bay had to tighten its budget. The tourism director position became a casualty. Jen had to take a layoff and Junque Love was literally closed by the governor as a nonessential business. And when Doug was allowed to re-open, his employees were 60+ in age, working part-time, so they were considered vulnerable and had to stay home.

“People were moving out of the area,” Doug said. “They were trying to sell their estates, but estate sale businesses, who had been able to help before, could not go into their homes or invite potential buyers to come inside to see what they had to sell.”

Time to pivot became 2020 watchwords. Doug called his friend who owned the franchise SLOCal Estate Auctions, Inc. The corporation advertises throughout the United States. The Littles purchased the exclusive franchise rights for the Central Coast, Fresno and Kern counties areas.

The concept of online estate sales was new to SLO County so the Littles had to advertise locally that their service was available. It didn’t take long before people found out the Littles could help. “We started getting calls from adult children of seniors, who lived in the Central Valley, and even from all over the United States, who needed help with their parents’ Central Coast estates.”

SLOCal Estate Auctions begins with a phone call to Doug and Jen at 805.440-0483 for an appointment to come out and assess what needs to be sold. And they will show up.

Doug explained, “If it is local, we meet the client onsite, or if it is a long-distance relative needing the assessment, we can go in by zoom or Facetime or even send photos to review the estate together and to determine what needs to be done.”

Jen and Doug price each item and/or bundle items in lots to sell. “We know the market and what people want to buy.” Some people will have a large estate, others, a few things that can be packaged with another estate sale clients.

Photos are then placed online at www.slocalestateauctions.com stating the timeframe for bidding, deadlines for pick-up and where to pick-up successful bids. Bidders do need to sign-up one time and then can return anytime during the auction or participate in future auctions. The Littles often have 2-3 auctions going a week. When bidding is closed, the individuals who have the highest bids are reminded where and by when to pick up their successful bids.

The Littles have encountered a variety of estate sale scenarios. Recently District Attorney Dan Dow contracted them to auction items from a large intake of embezzled items. They were first called to catalogue and value the eclectic range of items. A year later, they were awarded the sale and produced all but 1/10% of what they had originally valued all items.

Most clients are surprised how much others value what they are offering. A man moving to Casa de Flores hoped to raise enough from the auction to pay for a month’s rent. They were able to get him enough for six months.

Another man called them in when his wife passed. He had no idea she was hording jewelry. They found it in odd places throughout her closet and dressers.

One of Doug’s favorite’s stories is a lady who came to pick-up a bed she had more than earned. She seemed about 40-year’s old and was so thankful. She said, “My daughter and I were homeless, but we were able to just qualify for a place. We haven’t slept in a bed for over a year.”

Another highlight was finding a place for a piano, which in today’s market is hard to sell. When they dusted it off, they found it was a Steinway. The Atascadero Middle School was in need and purchased it for $700.

They loved the client who decided to sell off his entire large estate and donate all the proceeds to the Chapman House, which had been shuttered during COVID.

Good news!The Littles had sold their Morro Bay home to build the business. They’ve been renting and looking for a new home losing bid after bid on houses they could qualify for. Finally, they found a match. “It needs some work,” said Jen, “but we are here to stay in Morro Bay.”