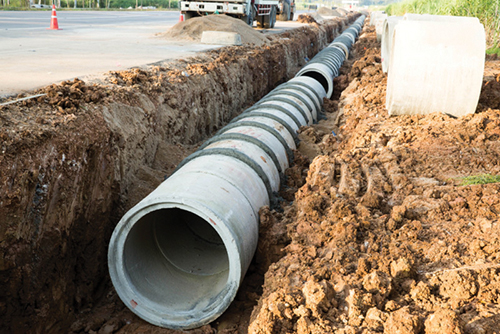 The Los Osos Community Services District is working to bring a water solution to the area.

Most everyone agrees that Los Osos’ water supply situation is shaky at best, walking a perilously thin line on sustainability, and the Community Services District is working on a possible solution that could bring a supplemental water source to town to alleviate some of the worries.

Los Osos CSD General Manager Ron Munds said his agency is looking into possibly building a water pipeline snaking down South Bay Boulevard into Chorro Valley, where it might be able to tie into the Chorro Valley Pipeline, which brings the State Water Project to Morro Bay and provides the majority of the City’s drinking water supply, some 1,313 acre feet a year.

Munds told Estero Bay News that in September 2021 he initiated a “water resiliency report” to look at the groundwater basin and it’s ability to sustain the community’s needs.

At about the same time, he said, the County Planning Department issued a report that listed Los Osos in the Top-5 “vulnerable communities” in terms of a reliable water supply.

Munds asked the CSD board for permission to look at alternatives, including a potential tie-in of the Chorro Valley Pipeline that brings in ready to drink state water.

LOCSD engineer Rob Miller was tasked with doing a preliminary design on such a pipeline and coming up with some preliminary cost estimates and options on where and how to hook up. Munds said that report should be done in September or possibly October.

Tapping into the County’s unused State Water Project allocation is preferable to tapping into the Whale Rock Pipeline, which brings water from Whale Rock Reservoir in Cayucos to the City of SLO’s treatment plant off Hwy 1 near Cal Poly.

The Whale Rock Commission that runs the pipeline and the reservoir is Cal Poly, the California Men’s Colony and the City of SLO, which also provides the Commission staffing.

“Whale Rock is raw water,” Munds said. “If we connected to Whale Rock we’d have to build a treatment plant too. And the City of SLO is not interested in relinquishing that water.”

Munds said they are right now looking for about 200-acre feet a year to offset some of the pumping in the aquifer, but, “It’s unknown what the need will be in the future — 30-years out.”

And there’s also the wild card of climate change and how it will affect the water supply for everyone in California.

He said the so-called “Basin Plan,” which the CSD and the other water companies in Los Osos are working from, is the key to resiliency.

To whit, the CSD recently awarded a contract to Pacific Coast Drilling of Templeton to drill a new water well near the end of South Bay Boulevard and Ocean View Drive, clear across town from Palisades Avenue, where seawater intrusion is heaviest.

That $734,000 contract is for digging a 700-foot deep well down into the town’s lower aquifer. Another contractor will design the pipeline that will be needed to bring this new water source into the CSD’s system and yet another contractor will eventually be hired to install that pipeline, for a total project cost that’s expected to be around $2.5 million.

And there’s another card up the proverbial sleeve, the possibility of building a regional seawater desalination plant and distribution system, which has been discussed amongst staffers from the County, LOCSD, Morro Bay and others.

“The County has most of the purveyors interested in the first phase” of a project, Munds said. He said the County has asked if the CSD was interested and he plans to ask the board about it in October or November.

Because of the limited and stretched thin water supply, the Coastal Commission has been throwing up roadblocks to the County’s allowing any new developments or remodels in Los Osos that increase water usage, until the situation is fixed, essentially throwing up a moratorium based on water supply This after about 30 years of a moratorium because there was no sewer system.

Munds feels the State Water Project is probably their best bet to bring in extra water any time soon.

“The City of Morro Bay doesn’t always use all of their allotment,” he said. They are in preliminary talks with Morro Bay about tapping its pipeline. SLO County Flood Control District, which encompasses the entire county, oversees the Chorro Valley Pipeline and the State Water Project allocations and the thousands of acre feet a year that is currently unused, flirting with the idea of selling some of that water to cities further down the Coastal Branch pipeline, which dead ends at Lake Cachuma in Santa Barbara County.

He said this whole exercise is putting out feelers to keep every option open.

Would Los Osos voters have to approve bringing in State Water? It depends.

Munds explained that the financing of the project is the key as to whether voters need to chime in. If the CSD were to tap into the State Revolving Fund and receive a low-interest loan, voters might not need to be involved. And he said there are grant monies available as well, and the new well project has already gotten $1.5 million in grants.

“But if the community says it doesn’t want it,” Munds said, “we won’t build it.”

Munds came to Los Osos from the SLO Public Works Department where he worked on the Nacimiento Pipeline, so he understands well how difficult and complex any water supply project is to complete.

But wasn’t the community sewer system supposed to recycle the treated wastewater, injecting it into the ground in a massive leach field located above Highland Drive at Broderson Avenue and make the supply more sustainable?

Yes, Munds said, but that’s supposed to take 10 years to fully work “and we’re not there yet.”

← Previous: June Primary’s in the Books; Now on to November Metallic-Tasting Water, OK to Drink →