Tennis and Pickleball Players in a Match for Space 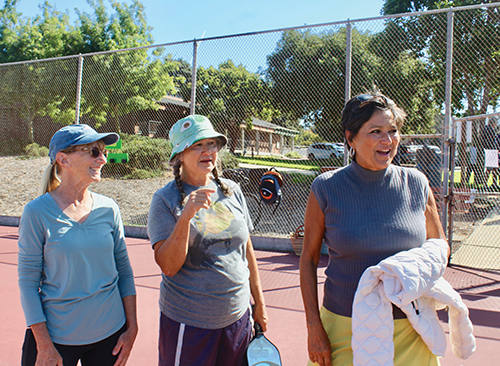 Third District Sperviosr Dawn Ortiz-Legg at Los Osos Community Park where she spoke with pickleball and tennis players about the need for increased playing space for each sport.  Photo by Theresa-Marie Wilson

Two different sports are competing for the same win — a place to play. The issue is between tennis and pickleball players and the courts at Los Osos Community Park on Palisades Ave.

The three courts were designed and built with tennis in mind and have been used for that for more than two decades, but the growing popularity of pickleball has created a space issue at the park.

About 60 players of both sports recently met at the courts with SLO County 3rd District Sperviosr Dawn Ortiz-Legg to start a conversation about converting tennis courts to dual-use courts with shadow lines or creating dedicated pickleball courts, the later of which would be a long way out.

“What we’re trying to do is optimize the use of existing recreational areas,” said Karen Kimura, a pickleball player. “The ultimate goal would be more courts for both. We just want a place to play where we don’t have to take the half an hour to set up. We play four days a week, and take a half hour each time to set up and clean up the courts.”

For those not in the know, pickleball is described as a combination of badminton, ping-pong and tennis that can be played indoors or outdoors on a badminton-sized court with a net similar to tennis net. It is played with a hard, plastic perforated ball and paddles similar to those used in ping-pong, but bigger and usually made of more advanced materials.

“Pickleball is so easy to learn and get started,” said player Ron Roach. “Anybody can come out here and get a point and have fun — children all the way up to senior citizens. It doesn’t take a high level of skill or level of fitness to do this.”

Pickleball uses a smaller arena; four playing areas can fit on one tennis court. As it is now, the players mark off the space with lines and strings and provide their own net.

“Before we came out,” Kimura said, “we surveyed to find out when tennis players actually are playing and found that most afternoons the courts were completely empty, so we play in the afternoons, so that we’re not interfering with tennis play.”

Over the years, the tennis community has done a lot of work to keep playable spaces for their sport for which the courts are sometimes used for United States Tennis Association matches.

Tennis players raised $80,000 that went to the SLO County Parks and Recreation Department for the construction of four courts, one of which was completed says Bill Good, a facilities consultant, who is also a tennis player and coach.

“This is really just an issue of not enough facilities, we don’t have enough courts,” Good said.

They have also installed windscreens, nets, fencing baseboards, and painted the court benches and table among many other maintenance needs.

One complaint from the tennis angle is that pickleball is disruptive to gameplay because of the noise created by whacking the “wiffle ball” back and forth.

“Pickleball is very interruptive of tennis play. When you are dealing with and 80 to 90 or even 100 mile an hour ball, and there’s noise in the background, it just really ruins good tennis. It’s a big deal. The proof is in the pudding with colleges and universities; they do not allow pickleball on their courts.”

Pickleball-court lines, often drawn on with chalk if regulation courts aren’t available, interfere also interfere. Tennis players say it is hard to determine a clean call of in or out, when two lines are competing for the eye’s attention.

“The local Los Osos tennis community is unanimously against our three courts being used for pickleball,” Good said in an email sent to the County Board of Supervisors among others. “Our huge historical investment in the three local tennis courts should be respected. Despite our complaining, SLO Parks has installed a lockbox at the courts containing all the pickleball nets etc. They also installed an on-court trashcan, we have wanted this forever, but they only did it when the pickleball players started occupying.  We are asking for signage at our courts stating only tennis allowed, and specifying no pickleball allowed.”

Tennis players suggest that pickleball be played on courts at Los Osos Middle School, at the Morro Bay courts or even the unused basketball courts at Sunnyside School until designated courts are built.

County Parks and Recs did create a court, of sorts, at the Sunnyside Elementary School basketball courts in Los Osos, but it is on asphalt, which is hard on the body if someone falls and also eats through the balls pretty quickly. Additionally, there isn’t a net, fence or protection from wind.

“At Sunnyside you need to play early in the morning because the wind just takes the ball,” said Ron Roach

Ortiz-Legg met with the athletes to discuss the issue and perhaps come up with an amicable solution. However, the limited playing space, is not likely to change soon. A lack of funding for additional courts is at the crux of the matter.

“ I’m going to take this information and perhaps we can sit down and try to come to some possible solutions,” Ortiz-Legg told the crowd. “It’s a matter of two big heavy items. The first one, everybody knows, is budget; budget in regards to Parks and Rec and everything that’s there ane what our priorities are. The second thing is that we all really we need to get a full clear message on where things are at right now; all development is held up because of the Coastal Commission in regards to your overall Community. Plan.”

Although there is an updated master plan for Los Osos Community Park that includes a long awaited dog park and talks of more court space, plans remain at a standstill until the Habitat Conservation Plan is complete.

That hold up, could be another chance to garner input regarding an increased need for recreational facilities.

“The message I’m hearing, and I’ve met with coaches of little league and the soccer league, we need facilities,” said Los Osos Community Services Board President Matthew Fourcroy noting that Los Osos hasn’t had any new facilities in more than a decade. “What it really says to me is that we need to work towards getting that community plan updated. Get the Habitat Conservation Plan in place, so we can actually go do something.”

For now space will have to be shared, and, hopefully, the two sports groups can rally a compromise.

The tennis courts at 2180 Palisades Ave. are open seven days a week from 7 a.m. to 8 p.m. For those looking to play pickleball, court times are Tuesdays, Thursdays and Sundays from 12 to 2:30 p.m. and Fridays starting at 5 p.m.