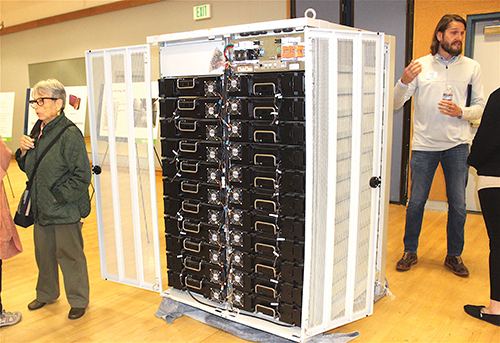 Representatives with Texas-based Vistra Energy are pleased with how a recent public meeting to discuss and explain the company’s proposed Battery Energy Storage System (BESS) facility went, though they were met by some citizens opposed to the project.

Vistra has proposed building a 600-megawatt lithium-ion BESS on 22 acres of its Morro Bay Power Plant property, redeveloping a site on the 117-acre property that used to be a fuel oil storage tank farm. The tanks were removed in 2011 by then plant owner, Dynegy, which subsequently merged with Vistra.

Vistra closed the 1950s-60s-era natural gas, boiler plant in 2014 and after unsuccessfully trying to sell the property for several years, has now proposed the BESS, in line with the State’s clean energy goals.

If the State is going to remake its energy grid with no-emissions power sources — wind and solar — it will need such storage facilities to even out supply-demand issues inherent with that type of a system.

Essentially, wind-solar systems are limited because the wind doesn’t always blow and the sun only shines during the day. So the idea is to generate the power when it’s available and store excess power to use when the capacity falls off but demand is still high.

The meeting at the community center was set up with various exhibits explaining the project and the science behind it, with an actual battery rack that was identical to the ones Vistra installed at its 300MW facility at the Moss Landing Power Plant.

Residents came armed with knowledge gleaned from numerous online news stories of disastrous fires at lithium plants in the U.S. and overseas, and shared by those on the gossip website, Nextdoor.

At the meeting, several wore T-shirts being made by the main opposition group that said — “No BESS Lithium Battery Storage Near Morro Bay Beaches & Neighborhoods.” Others carried protest signs that said “Safety First; No Batteries By The Bay.”

Yeager, who was stationed by the battery rack, went into great detail about the fire suppression system employed with that particular set up, explaining that it’s designed to prevent overheating and the batteries catching fire.

Lithium-ion batteries, like those used in vehicles like Teslas, have a danger of overheating and catching fire when they get wet. In the recent Hurricane Ian in Florida, videos have surfaced on the Internet of electric cars catching fire, even though they sat, door handle-deep, in floodwaters.

Yeager also said that while that particular rack is like the ones they’re using at Moss Landing, battery technology is a fast changing industry and by the time their Morro Bay project is ready to be built, they may switch to a different system.

In Moss Landing, the company installed LG Energy Solutions lithium-ion batteries. LGES is a South Korean company that has been making rechargeable batteries since the early 1990s. PG&E also has a battery facility at Moss Landing, that uses Tesla batteries. That facility caught fire Sept. 23 and caused an area-wide emergency, as lithium batteries give off toxic smoke when they burn.

At the meeting, Vistra was grilled by residents and while some may have gotten their batteries a little heated, the overall atmosphere was civil. Vistra thought the night went well.

“Vistra is very pleased with the turnout and results of the community meeting held last week,” said Kyle Weeks of Vistra when asked by EBN for comment. “The event allowed people to conveniently learn credible, fact-based information about the basic details of the proposed project, safety, demolition of the stacks and power building and future site development under a master plan.

“Attendees got to personally ask questions of Vistra staff directly overseeing the proposed project in a conversational format and see an actual battery rack with modules and learn how they work.”

The project is currently under environmental review by a consultant hired by the City but paid for by Vistra. The Draft Environmental Impact Report is slated to be released for public comments sometime early next year.

The City has also begun a process to write a master plan for the power plant property.

And, the City has an agreement with Vistra that requires the company to tear down the old power plant and its three iconic smoke stacks by 2028 or pay the City $3 million.

It’s unclear at this time, what properties or how much more the City will get from Vistra in the final development deal that will likely be reached, should the project move forward. Duke Energy, which proposed replacing the old plant with a new one, had committed to paying the City a minimum of $2 million a year, and also deeded over several waterfront properties, including the 0.9-acre Triangle Lot where the Maritime Museum now sits, along with a boat storage yard that brings revenue to the Harbor Department.

Though Duke’s project ultimately failed to get a permit over the once-through cooling system, the City did obtain the Triangle Lot, as well as Coleman Beach.

The BESS has much agency review ahead of it, including a stop at the Coastal Commission, where the biggest hurdle may lie, as a BESS facility is not necessarily “coastal dependent,” which is a requirement in the Coastal Act for such large industrial developments in the Coastal Zone.

The old power plant used seawater for cooling steam and thus was coastal dependent. Duke’s project proposed to continue with that, which ironically in the end proved to be the project’s undoing.

Does Vistra plan on more public meetings? Weeks said they are. “Providing accurate information and informing the community is very important to Vistra. Yes, we will be doing more community meetings.”

The BESS is one of at least three proposed energy storage proposals that are being sited near Morro Bay, plus the federal Bureau of Ocean Energy Management (BOEM) is in the process of auctioning off three large areas of ocean about 30-miles of the Coast of San Simeon for offshore, floating wind turbines that are designated to have 3-gigawatts of power generating capacity. That power is tentatively slated to come ashore at Morro Bay and connect with the energy grid at the old power plant.

A Canadian company, Hydrostor, is proposing a 400 MW, “Advanced Compressed Air Energy Storage” plant, on farmland at the base of Hollister Peak.

And another company is pursuing a hydroelectric storage facility for the hills above Whale Rock Reservoir.