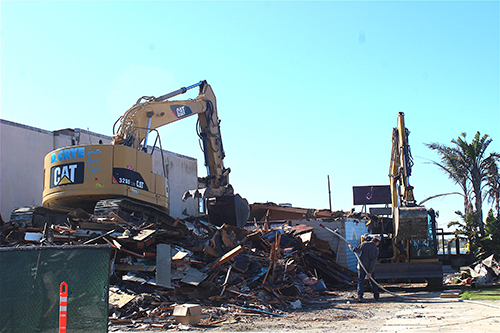 Demolition work began on the Morro Bay waterfront to make room for a Motel project.

Demolition work recently began in the rebuilding of one of the few remaining buildings from the original Morro Bay waterfront.

TLC Family Enterprises, which holds the master lease on lease sites Nos. 87/88 and 87W/88W made quick work of the building that for decades housed Bob’s Seafood Restaurant and most recently had Off the Hook.

TLC is Travis Leage and Cherise Hansson’s company formed to take over and rebuild the lease site that had recently belonged to Violet Leage, Travis’ aunt, before she lost it in a somewhat shady real estate transaction to a third party.

But in 2018 when the City put the lease site out for bids, that third party was passed over in favor of TLC, which took over the lease site and has been working on the project for some time.

As with all waterfront lease projects, final permitting lies with the Coastal Commission in a process that greatly stretches out and complicates the process.

TLC’s project was last before the City Council Jan. 25 seeking approval of a new loan and accepting a deed of trust for the 50-year lease TLC was granted as part of the redevelopment deal.

With the City’s sign-off on the loan documents, they wasted little time getting started with demolition. In just a few days the buildings were down and carted off to the landfill.

The project called for demolition of a 6,687 square foot building, and construction of a 2-story, 7,994 s.f., 25-foot tall building with retail and restaurant uses on the ground floor and eight boutique motel rooms on the second floor.

Also, replacement of an existing side-tie dock and gangway, replacing pilings and public access improvements to include extending the Harborwalk around the water side of the new building and improving a small courtyard area between the Plaza and the Boatyard Center next door.

They will replace nine wooden pilings with concrete piles that will help support the Harborwalk extension. There will be new seating areas and three public restrooms, according to the City’s report.

Hansson owns and operated the Under the Sea Gallery and gift shop, which was the lone business left open on the lease site. She has another store a few doors down in the Rose’s Landing Complex.

The building was one of just a handful left on the Embarcadero that date back to the 1960s, when the City first took control from SLO County of the State tidelands areas.

The others are the Libertine, which is next door to TLC’s lease site and the former Morro Bay Aquarium, which is being remodeled into a new, Three Stacks and a Rock brew pub.

“Completion of the redevelopment of this lease site in the heart of the Embarcadero of one of the last remaining ~1960’s-era buildings on the waterfront will modernize and upgrade this key property,” reads a City staff report.