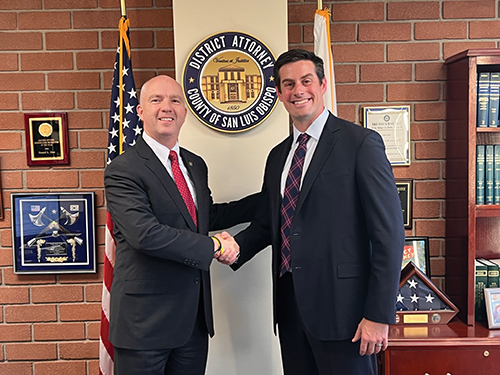 Winning one of the biggest murder trials in San Luis Obispo County history apparently didn’t go unnoticed, as the prosecutor in the Kristin Smart murder case has accepted a new job in the county where the trial was moved.

“I could not be more proud of a prosecutor than I am today of Christopher Peuvrelle,” D.A. Dow said in a news release, “for the commitment and professionalism shown by his determined effort to achieve justice for Kristin Smart. I will always be grateful for his service and friendship.”

SLO County is losing one of the rising stars in the D.A.’s Office. “While I am sad to lose Chris as a prosecutor in our community,” D.A. Dow said, “he is joining a great office under the leadership of [Monterey County] District Attorney Jeannine Pacioni and I am confident that he will pursue justice just as vigorously for the People of Monterey County. This rare opportunity to become a supervising attorney puts Chris’ experience and talent to great use and it will serve Chris and his family well.”

Peuvrelle was lead prosecutor in the months-long trial of Paul Flores and his father Ruben Flores for the May 1996 disappearance and murder of Cal Poly freshman Smart.

A change of venue to Monterey County Superior Court in Salinas was ordered and Peuvrelle took to court a purely circumstantial case against the two Flores men.

Paul, who was also a freshman in 1996 and is now in his mid-40s, and his octogenarian father, had been the subject of suspicion since shortly after Smart vanished without a trace after an off-campus Memorial Day Weekend party. Paul Flores was the last person to be seen with Smart, whose body has never been found. He stood accused of killing Smart while raping her.

The father was accused of accessory after the fact and helping his son hide Smart’s body, allegedly underneath a deck at his Arroyo Grande home but recently moved to a new, unknown location.

In the end, a jury convicted Paul Flores of first-degree murder but acquitted Ruben Flores of all charges.

Peuvrelle won the 26-year old case that few thought would ever be brought to trial, albeit it was a split decision.

Ironically, the two juries reached different conclusions regarding Paul Flores’ guilt, as one of Ruben Flores’ jury members said after the trial that they didn’t believe Peuvrelle had proven the murder case against Paul Flores. His guilt was a finding they had to make first in order to then convict Ruben Flores of a cover up.

In essence, if there was no crime committed, there can’t have been a cover up.

Convicted of murder, Paul Flores is scheduled to be sentenced on Dec. 9 in a Salinas courtroom. Peuvrelle will continue to work the case through the sentencing phase, D.A. Dow said.

However, Paul Flores’ attorney has filed a motion to delay the sentencing that is scheduled to be heard on Friday, Dec. 2.