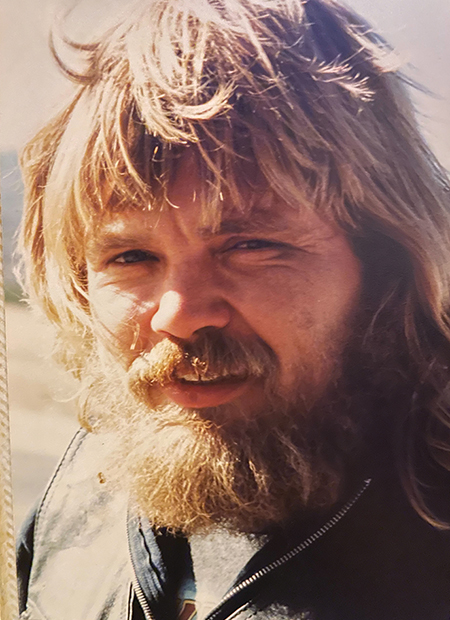 Paul looked like what a Viking would look like if he rode a Harley-Davidson. He had long, tied back, blond hair, a full beard that greyed as he aged, and he wore leather jackets and jeans.

He had a life-long fascination with the Vikings who had inhabited the fjords where he grew up in Roskilde, Denmark. Family lore has it that Paul’s first spoken word was “America” followed soon after by “motorcycle.”

Early in life he earned the nickname, “Buller,” which was the only name he was known by for any Dutch person.

He designed, built, and re-built motorcycles. After living in the desert town of Anza, Paul owned a motorcycle shop in Bishop, Calif. He discovered Morro Bay in 1979 when he and his longtime friend Kurt Carlson first toured the U.S.

He moved to the Central Coast in 2016 and found a job at Morro Bay Appliance where he worked until he retired, and then came back to work part time after retiring at the end of 2021.

Paul had many circles of friends that included car and motorcycle guys and people he talked to all over town, including the homeless men at a park near where he lived.

Paul was bilingual and ambidextrous, and was a mechanical genius, who was able to fix any machine.

One of his proudest achievements came in 2007. He and Kurt brought a 1950 Vincent motorcycle back from a basket case to a running machine. They developed the bike over the next few years and in 2011, they set a new speed record at the Bonneville Salt Flats.

Paul was a great reader, had a wry sense of humor, and wrote short stories that reflected his Danish childhood.

Paul Jensen is survived by his son John of Arizona, his mother Gisele, and sister Tatjana and her children, Pernille and Henrik of Denmark. Paul was cremated and some of his ashes were released by Kurt near Morro Rock and some were buried next to his father in Roskilde, Denmark.

Friends of Paul Jensen are planning a memorial celebration of his life from 9-10:30 a.m. Saturday, Aug. 20 at the weekly car show in the Front Street Parking Lot on Morro Bay’s Embarcadero (by the Maritime Museum). All who knew him are invited.