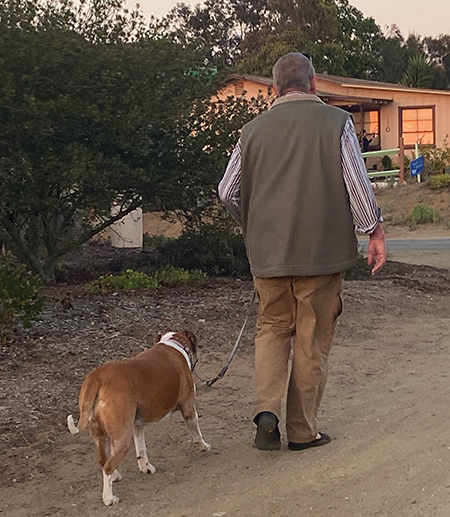 Tom, unexpectedly and sadly, passed away at the age of 66 years on May 19, 2022, at French Hospital surrounded by family and friends. He died of

septic shock following surgery for a bowel obstruction, which turned out to be a rectal tumor.

That would have surprised Tom since he felt the trouble was higher up in the GI tract. The surgery did not go well. He was in ICU for two days and we were called to his bedside in the evening after visiting hours and were with him when he passed at about 12:30 a.m. on May 19. He never woke up, actually, he saw Dorothy and Maureen, post-op for a second. He was kept

Growing up Tom was athletic and enjoyed sports during his school years. He played varsity football for the Villa Park Spartans, helping the team go all the way to CIF finals in his senior year. Tom graduated from Villa Park High School in 1974 and soon discovered his interest in computers, beginning with the old IBM DOS and ping- pong game. He attended Santa Ana College

and transferred to Cal Poly Pomona where he received a Bachelor’s of Science degree in computers. This culminated with him working for the County of San Luis Obispo for over 30 years, helping in all aspects of their computer problems.

On Valentine’s Day, February 14, 1988, Tom married Maureen. Together they raised their children Brandon, Cole, and Dorothy and moved into their

forever family home in Los Osos (1993), where they raised their loving family and became an integral part of the community. Tom loved being a father and was always the first to lend a hand to help anyone in need. Unfortunately, Tom’s unexpected passing preceded his daughter’s (Dorothy’s) summer wedding, but his presence was there and will be with all of his family until they meet again. He went into surgery feeling confident that he would be able to walk his daughter down the aisle on June 25. He was there in spirit.

The memorial service will be held on Sunday, August 14, at 4 p.m. at Trinity Methodist Church, in Los Osos. If you knew Tom, we invite you to attend this celebration of life, as our family would love to meet you and share our memories of Tom together.