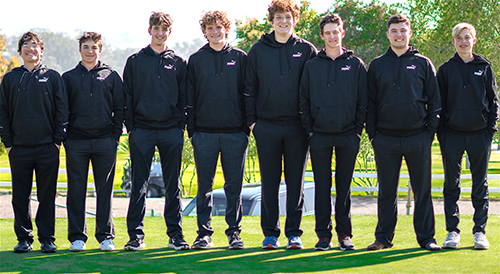 Morro Bay’s Varsity Boys Golf Team had a “Tiger” of a season, winning the fist Mountain League Championship of any MBHS sports team, and sending one player into the CIF Div. 1 Regionals where he scored among the top players in the state.

Coach Sean Allstot said the boys “are incredible on and off the course. They love the game of golf, love practicing, love playing, and love challenging themselves and each other.”

The Pirates pulled off the impossible and finished the season undefeated in both preseason matches and league matches, quite an accomplishment considering the other teams in Mountain League boys golf include Atascadero, Paso Robles, San Luis Obispo, Saint Joseph’s, Righetti, and Nipomo, all larger schools with much larger enrollments that the school by the beach.

After blanking the league the team got to choose which division they played in the CIF Central Section. “The Boys elected to play up in Division 1, rather than Division 2, which is what they were assigned,” Coach Allstot said. “They placed sixth in the Central Section, but only missed qualifying [top two teams play on] by six total strokes as a team.”

That heartbreak was eased somewhat, when one of the Pirates qualified to play on.

Senior Johnathan Riley qualified for the individual Southern Regional competition, Coach Allstot said, and shot an impressive 76 over 18 holes. That earned him 50th place out of 126 golfers and made him one of the top prep golfers in California.

Normal match play is nine holes and at most golf courses par for nine holes is 36.

Coach Allstot had some “Thank Yous” that he wanted to relay.

“We would like to thank Morro Bay Golf Course and the community there,” he said. “The course, the men’s and women’s clubs, and the patrons all treat our team wonderfully. The kids are there all the time and the community embraces them. It’s a thing of beauty.

“I’d also like to thank all the boys who are seniors. They spent the last four years working and playing hard. They will be missed!”

Estero Bay News congratulates the Boys’ Varsity Golf Team on its history-making season and wish them straight tee shots and many birdie putts in the future. 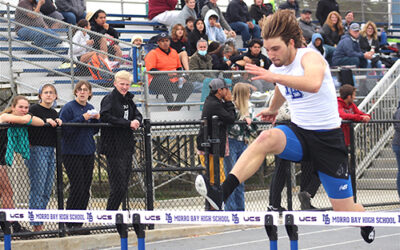 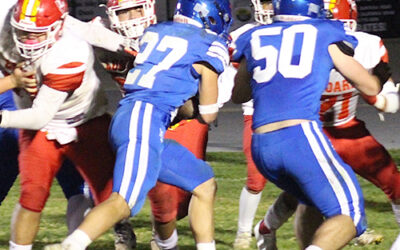 Pirate Athletes to Play in College

Morro Bay High School’s Dylan Turner, No. 27, dives into the line for one of his three, rushing touchdowns against...