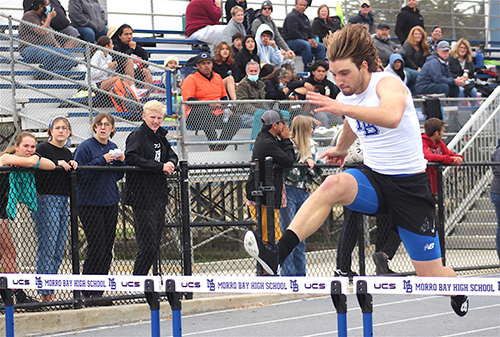 Senior, Phoenix Popp, competing here in the 300M hurdles at the Pirate Relays Meet, won the Ocean League Championship in the 110-meter high hurdles, the 300M intermediate hurdles, and triple jump to lead the Pirates to their first league title in nearly 50 years.

Pirates’ Coach Chuck Ogle said it was the first MBHS Boys’ League Track Championship since 1974, when he was a Pirate. “It’s the first boys league title since yours truly, Jack Smith, Larry Newland, Jeff French and other locals were on the team,” said an enthusiastic Coach Ogle.

The Pirates jumped past their league foes on the strength of their hurdlers.

The versatile Diaz, coach Ogle said, added an eighth place finish in the triple jump at 36’-06”. In the meet, the top-8 place finishers score points for the team in descending order, with first scoring 10 points and eighth one point.

Junior, Hunter Whitson, who Coach Ogle said “has been coming on strong,” finished third in the discus at 121’-4” and seventh in the shot at 38’-3”.

Senior sprinters, Mitch Carter, Mark Hutchinson, and Camden Steeb teamed up with sophomore Nathan Pech for third place in the 4 x 100 meter relay clocking 45.85. Hutchinson added a seventh place finish in the 100 in 11.69 and was seventh in the triple jump at 36’-07”.

With its runners and throwers doing outstanding, Coach Ogle said the Pirates’ strength rests in their vertical game.

The Pirates “sealed the deal with an overwhelming show of force in the vertical jumps — a traditional area of strength for the team,” he said.

Freshman Liam Burton was fourth in the high jump at 5’; senior Camden Steeb tied for fourth at 5’; and Anthony Frere, who also cleared 5’ but finished sixth on misses; and Nathan Pech was seventh at 4’-10”, as the Pirates virtually owned the event on this day.

The Pirates also got great performances out of their freshmen athletes.

“Our enthusiastic and talented ninth grade class contributed across the board,” Coach Ogle said.

Doing a bit of reminiscing, Coach Ogle reflected back on the track teams and the glory days of the early 1970s.

“The 1974 Los Padres Athletic League title was the fourth championship in a row for the Pirates,” he said. “Members of the ‘74 team included [per the collective memory of some community elders] Jack Smith, Larry Newland, and sprint legend Randy Reed, [whose 100-meter school record of 10.80 set in 1973 still stands]. The 1974, MBHS Athlete of the Year, Allen Peterson [who held the mile and 1-mile school records for years], myself, Ken Peters, Jeff French, Marin Patague.”

← Previous: Pirate Athletes to Play in College Local Radio Host Revisits the Past in e-Book → 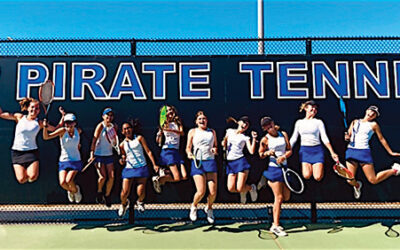 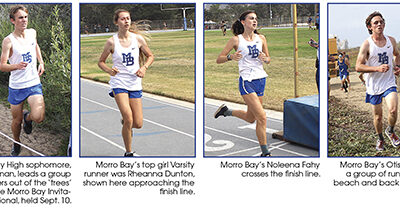